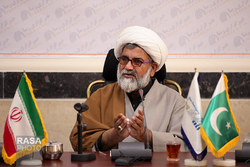 The secretary-general of the Association for Pakistani Muslim’s Unity warned Indian leaders against the killings of the people in Kashmir.

RNA - The secretary-general of the Association for Pakistani Muslims’ Unity, Hujjat al-Islam Rajeh Nasir Abbas Jafari, in response to the revocation of Kashmir’s self-government, warned the Indian government about the consequence of its actions.

Pointing to the appaling crimes of the Indian army in Kashmir, committed in cooperation with the US and Israel, he said, “Muslim nations won’t remain silent on the new ploy of the Indian government.”

The secretary-general of the Association for Pakistani Muslim’s Unity, saying that the supports of the US and Israel have rendered the region’s conditions terrible for Muslims, maintained, “Although Israel’s attempts made through the deal of the century against Palestine have failed, a similar policy is being implemented in Kashmir, and the massacre of Muslims in this region is being taken place, however, they won’t meet their aims.”

Condemning the killing of Kashmir people, he further noted, “The situation in this region is changing rapidly, and the friendship of any people with the US is synonymous with suicide.”