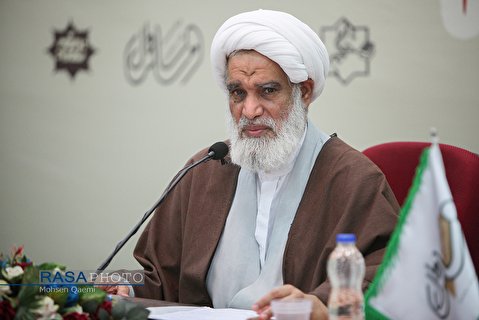 RNA – In an exclusive interview with Rasa News Agency, Ayatollah Abbas Ka’bi, a member ‎of the Board of Directors of the Assembly of Experts of the Leadership, referred to Iraqi ‎Prime Minister Mustafa al-Kadhimi’s meeting with Ayatollah Sayyed Ali Khamenei, the ‎Supreme Leader of the Islamic Revolution, calling it historic, important and influential in ‎recognizing the enemies and exposing the evil façade of the terrorist United States and ‎added, “The United States is the enemy of Islam and the Muslims and nations of the region.” ‎

Explaining the long-standing relations between Iraq and Iran and the emphasis on an ‎independent Iraq by the Supreme Leader, he said, “We support an independent Iraq while ‎preserving its unity and territorial integrity and we never intend to interfere in its internal ‎affairs.”‎

Stating that during the meeting with the Iraqi Prime Minister, the Supreme Leader ‎emphasized the issue of hostility and called the United States the enemy of Iran, Iraq and ‎the nations of the region, he emphasized, “According to the Supreme Leader, the ‎assassination of General Soleymani and Abu Mahdi al-Muhandis is an example of the results ‎of the American presence in the region.”‎

He explained the Supreme Leader’s emphasis on expelling the United States from the region ‎and said, “The Iraqi people showed their commitment to the blood of the martyrs and ‎demanded the expulsion of the United States from the region with the historic funerals of ‎General Soleymani and Abu Mahdi al-Muhandis and the unique marches against the arrogant ‎powers and the Iraqi parliament’s decision to expel the Americans.”‎

Ayatollah Ka’bi stated, “The Supreme Leader said that we, as Islamic Iran, will strike a ‎reciprocal blow to American terrorism and considered the missile attack on Ayn al-Asad ‎Airbase a slap in the face, emphasizing that a great revenge that will bring about great ‎changes is on the way.”‎

Referring to the services of the religious authorities, Popular Mobilization Forces and the ‎Islamic Resistance in Iraq, he said, “The United States has always sought evil and the Iraqi ‎government must not pay attention to American harassment and hostility in the long-‎standing Iraq-Iran relations.”‎

In other remarks, Ayatollah Ka’bi called the action of American fighter jets and disturbing the ‎Mahan Air passenger plane over Syria on July 23 as “a terrorist act” and stated, “This ‎terrorist act was also recorded in the documentation of the Americans and while pursuing ‎legal action, appropriate action against the interests of the Americans at sea and on land ‎should be on the agenda as an international reciprocal action.”