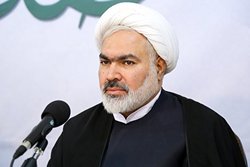 The head of the Institute of Islamic Sciences and Culture said, “Every country that wants ‎progress, must expel the American military forces from its country and prevent its ‎interference in its internal affairs.”‎

RNA – In an exclusive interview with Rasa News Agency, Hujjat al-Islam Najaf Lakzaei, the ‎director of the political department at Rasa News Agency, said that the corrupt presence of ‎the Americans in West Asia has been one of the axes emphasized by the Supreme Leader of ‎the Islamic Revolution [Ayatollah Khamenei] in his diplomatic and international meetings and ‎his Hajj message, especially after the assassination of General Qasem Soleymani. ‎

In this regard, the head of the Institute of Islamic Sciences and Culture said, “Some ‎considered this crime to be the beginning of a full-blown war between Iran and the United ‎States.”‎

His Eminence said, “Imam Khomeyni said in a guide that in conditions of slavery, the slave ‎won’t flourish because a slave can’t plan for his future but the slave owner plans for this ‎person. Hence, the hegemonic and arrogant powers of the world colonize other countries ‎and establish military bases in these countries, just as the United States established the Ayn ‎al-Assad Airbase in Iraq and the President of the United States [Donald Trump] traveled to ‎this military base in Iraq without informing the Iraqi government and then requested a ‎meeting with the Iraqi president.”‎

Hujjat al-Islam Lakzaei added, “For this reason, Iraq and any other country that wants ‎growth and development and wants to have a long-term plan for its future must expel the ‎American military forces from its territory and prevent American interference in its internal ‎affairs.”‎

His Eminence explained, “In order to ensure their permanence and power in the countries of ‎the region, the hegemonic powers continuously make other governments dependent on its ‎power and this dependence will be achieved by keeping countries week, keeping the ‎government in need and creating insecurity in other countries.”‎

He said, “Therefore, in order for these countries not to be able to achieve their full security, ‎the colonialists create and support terrorist groups in order to create insecurity and terrorist ‎operations in these countries. The West, especially the United Kingdom, has created the ‎cancerous tumour of the Zionist regime in order to continuously create insecurity in the ‎Middle East, so that they can easily exert influence and power in the region.”‎

Hujjat al-Islam Lakzaei said, “The Supreme Leader of the Islamic Revolution [Ayatollah ‎Khamenei] is the only compassionate leader for the Islamic societies and he has repeatedly ‎emphasized the dignity and pride of the Muslim and neighbouring countries, calling for them ‎to take charge of the internal government and expel the Westerners and the United States ‎from their countries and take control of the fate of the government.”‎

His Eminence stated, “The United States leads the global system of domination and wants ‎the world to be divided into two parts – the colonial power and the colonialized but the ‎Islamic Republic of Iran doesn’t accept this issue and according to the instructions of the ‎Supreme Leader, the world will be divided into two parts – the hegemonic and anti-‎hegemonic. Iran is one of the anti-hegemonic countries and the Islamic system continues to ‎fight against the colonialists in order to eliminate the domineering and arrogant regimes in the ‎world.”‎

He said, “However, the United States, as the ‘great Satan,’ seeks to expand its dominance ‎by creating insecurity in other countries, so that everyone feels dependent and afraid of it ‎and obeys the orders of the American rulers.”‎

Hujjat al-Islam Lakzaei said, “On the other hand, the expansion of security in Islamic ‎countries will mark the death of the United States in the Middle East. For this reason, when ‎Iraq feels a sense of power and internal security, it will never accept the American military as ‎a guest of General Soleymani. This country of terror and their rulers should remember this ‎crime with shame and pride.”‎

In conclusion, he stated, “Today, American relations with powerful countries such as China ‎and Russia are strained and the [American] dollar has been removed from many international ‎transactions. The United States is on the verge of collapse and is facing an identity crisis ‎from within and it is going through the worst period in its history and God-willing, the decline ‎of this country will occur in a sudden way, like a rotten fruit that has been eaten by a worm ‎and has become heavy and suddenly becomes falls to the earth.‎‏”‏