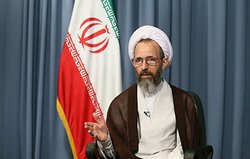 A member of the Supreme Council of the Islamic Seminaries warned of the enemies’ plans ‎for riots and sedition in Iran as part of their all-out efforts to harm the Iranian people.‎

RNA – In an exclusive interview with the Rasa News Agency, Ayatollah Mahmoud Rajabi, a ‎member of the Supreme Council of the Islamic Seminaries, referred to the support of hostile ‎media organizations for domestic security criminals, said, “Undoubtedly, the enemies and ‎foreigners have always supported domestic rioters. Under the pretext of the high price of ‎gasoline, they intended to disrupt the security and public order of Iranian society but with ‎the wise planning and guidance of the Supreme Leader of the Islamic Revolution [Ayatollah ‎Khamenei], this conspiracy was thwarted.”‎

He stated that the arrogant powers of the world are taking advantage of every excuse and ‎opportunity to harm and tarnish the image of the Islamic system and added, “When the ‎conspiracies of the enemies inside the country are foiled, it’s natural that they are worried ‎about their internal accomplices and spies and provide them with all-round and media ‎support.”‎

Ayatollah Rajabi said, “Foreigners have remained silent about the crimes of their servants in ‎the Middle East but always accuse the Islamic Republic of Iran of violating human rights and ‎supporting terrorism.”‎

His Eminence said that the monarchists and the hypocritical People’s Mujahedin of Iran are ‎allies of Israel and the United States and added, “They are trying to implement the orders of ‎their masters and launch chaos and sedition inside the country.”‎

Stating that some with their hashtags intend to disrupt the psychological atmosphere of ‎society, said, “The monarchists, the hypocritical People’s Mujahedin of Iran and expatriates, ‎by managing social media accounts, have tried to create a media atmosphere against the ‎Islamic system and the judiciary by creating the hashtags ‎‏) ‏‏#اعدام_نکنید‏‎#StopExecutionsInIran) on social media.”‎

Ayatollah Rajabi stated, “The Iranian people have always supported the Supreme Leader ‎and the Islamic system and the intelligent people of the country won’t be influenced by the ‎atmosphere of foreign media.”‎

Ayatollah Rajabi, stating that the judiciary should deal decisively with security criminals within ‎the framework of the law, said, “In Islamic courts, all criminals are given the right to defend ‎themselves in accordance with religious norms. For this reason, the judiciary must execute ‎their verdicts without regard to pressures and media coverage, given the evidence of the ‎perpetrators’ guilt.”‎

Vice-President of the Imam Khomeyni Educational and Research Institute:‎

Some people have suffered from ‘political Alzheimer’s’‎