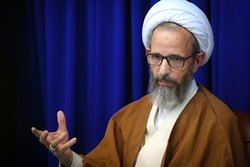 Ayatollah Rajabi emphasized that despite all of the plots, sanctions and problems imposed ‎on Iran, the Iranian people stood firmly and resolutely in support of the Islamic Revolution.‎

RNA – Speaking on the sidelines of a gathering and rally to commemorate the 9th of Dey ‎‎[December 30th] epic in Qom, Ayatollah Mahmoud Rajabi, the vice-president of the Imam ‎Khomeyni Educational and Research Institute, said that Iran’s Islamic system of government ‎is dependent and reliant on the people’s votes and stressed, “The believing and religious ‎people are the supporters of the system.”‎

The 9th of Dey ‎[December 30th] rallies marks the anniversary of the date when ‎millions of ‎people went to the streets on December 30, 2009 to demonstrate their ‎support for the ‎Islamic establishment after the post-election riots.‎
‎ ‎
Pointing out that the people support the system through their presence in different arenas, ‎he said, “Whenever the enemies see the people’s passionate and revolutionary presence in ‎support of the system, they change their positions.”‎
‎ ‎
Ayatollah Rajabi stated that the timely presence of the people guarantees the protection of ‎the system and symbolizes the authority of the country and added, “The epic presence of ‎the people on the scene conveys the message that the Iranian people support the Islamic ‎Revolution with resoluteness, endurance and resistance despite all the plots, sanctions and ‎problems imposed on the country.” ‎

Noting that the weak and deprived nations are learning lessons about resistance from Iran’s ‎revolutionary presence Iran in various arenas, His Eminence stated, “This widespread ‎presence creates hope in the hearts of the oppressed people and creates terror in the hearts ‎of the enemies.”‎