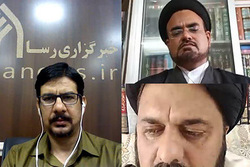 An analytical conference entitled “The Study of the School of the Thought of Imam ‎Khomeyni in India and Pakistan” was held via video conference at the headquarters of Rasa ‎News Agency in Qom in the Urdu language. ‎

RNA – An analytical conference entitled “The Study of the School of the Thought of Imam ‎Khomeyni in India and Pakistan” was held via video conference at the headquarters of Rasa ‎News Agency in Qom in the Urdu language. ‎

Hujjat al-Islam Dr. Hamidi said, “When we study the lives of the leaders of the revolutions of ‎the world, we see that they are a series of the rules and methods of their lives, according to ‎which they determine the way and method of their goals. The simple life of Imam Khomeyni ‎is the most important corner of the Islamic Revolution.”‎

He stated that Imam Khomeyni’s simple lifestyle isn’t a slogan, a political goal or ‎appearance, adding, “The Imam’s simple lifestyle was derived from his mystical life. Imam ‎Khomeyni wasn’t happy with a materialistic and seemingly pleasant life, he paid a lot of ‎attention to the spiritual aspects and considered it more valuable and higher than a ‎materialistic life.”‎

Analyzing Pakistan’s political issues, the analyst stressed that the purpose of a simple life ‎isn’t to live in poverty and said, “Simple living means that human beings, despite having ‎financial abilities, live like the lower and deprives people of society.”‎

Hujjat al-Islam Dr. Hamidi emphasized out that Imam Khomeyni’s simple lifestyle and ‎avoidance of an aristocratic lifestyle had a message for the leaders who live in opulent ‎palaces and added, “Islamic leaders who are luxury-oriented cannot feel the pain of the weak ‎classes of society. The Prophet of Islam and the Imams also didn’t like aristocracy.”‎

Hujjat al-Islam Dr. Hamidi considered the theory of Wilayat al-Faqih (Guardianship of the ‎Jurisprudent) as one of the most important pillars of Imam Khomeyni’s political thought ‎concerning the leadership of the Islamic society during the occultation of Imam al-Mahdi and ‎emphasized, “Imam Khomeyni is the only jurist who established an Islamic government on ‎the based of this theory and had the first experience of the rule of an Islamic jurist over ‎society.” ‎