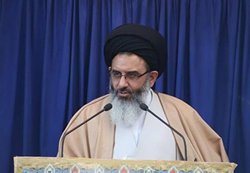 Hujjat al-Islam Tabatabai said, “The Islamic Resistance Axis, with the sacrifice of the likes of ‎Martyr Haj Qasem Soleymani, didn’t allow disasters such as the destruction of the graves of ‎the Imams in Jannat al-Baqi to be repeated.”‎

His Eminence referred to the anniversary of the destruction of the graves of the Imams in ‎Jannat al-Baqi Cemetery [in Madinah] by Wahhabi Saudis and said, “The Takfiris didn’t ‎benefit from true Islam, and today we see that terrorist Takfiri groups are supported by the ‎enemies of Islam to show that the face of Islam is violent and savage.”‎

On the 8th of the Islamic lunar month of Shawwal, in the year 1345 AH (April 21, 1925), the ‎mausoleums in Jannat al-Baqi were demolished by King ibn Saud.‎

He continued, “Wahhabism is a colonial, arrogant and evil project to harm Islamic unity and ‎destroy the image of Islam in the minds of society.”‎

His Eminence continued, “If the Islamic Resistance Axis existed at the time of the destruction ‎of the graves of the Imams in Jannat al-Baqi, the enemies of Islam wouldn’t have dared to ‎approach Jannat al-Baqi, let alone destroy these holy graves. Today, we witness that ‎with the sacrifices of the fighters of the Islamic Resistance Axis, including General Shahid Haj ‎Qasem Soleymani, tragedies like the destruction of the graves of the Imams in Jannat al-‎Baqi, haven’t occurred to the holy shrines of the Ahl al-Bayt again.”‎

He referred to the upcoming death anniversary of Imam Khomeyni [who died on June 3, ‎‎1989] and described his character as very great and emphasized, “Imam Khomeyni revived ‎pure Islam and stood against the arrogant powers.”‎

Hujjat al-Islam Tabatabai continued, “Imam Khomeyni taught us that the people’s faith in ‎God can destroy the hegemony of the United States, and we have all seen how the Iranian ‎tankers [sent to Venezuela] rubbed the United States’ nose and sanctions into the ground ‎and this honour is because of the blessing of Imam Khomeyni’s revolution.”‎

In conclusion, he emphasized that the regional power of Islamic Iran and the Islamic ‎Resistance Axis will increase day by day because of divine strength and power.‎