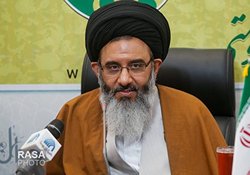 Hujjat al-Islam Tabatabai described Lady Fatimah al-Zahra as a model of adherence to wilayah and emphasized, “Complete adherence and strong ties to wilayah prevents the deviation and defeat of the ummah.”

RNA – Speaking on a live television program broadcast from the Holy Shrine of Lady Zaynab in Damascus, Syria, Hujjat al-Islam Abolfazl Tabatabai, the representative of the Supreme Leader of the Islamic Revolution [Ayatollah Khamenei] in Syria, emphasized the importance of adhering to wilayah (guardianship) and said, “The ummah which wants to be happy must make a deep bond with wilayah. If this bond is created, the ummah won’t be deviated and won’t be defeated.”

His Eminence referred to the striving of General Qasem Soleymani and said, “Haj Qasem didn’t seek to command but rather, he sought to execute the command of the wali (guardian) before it was commanded and he was, of course, an obedient soldier of wilayah.”

Hujjat al-Islam Tabatabai noted, “The happy ummah must adhere to the will of the guardian but it’s worthwhile to recognize and act before the guardian makes an order.”

His Eminence added, “Adherence must be accompanied with insight and mankind must be in a polluted environment alongside wilayah in order to take the right path. Among the features of the ummah that adheres to wilayah is that it offers sacrifices for wilayah. Lady Fatimah al-Zahra was martyred for wilayah and sacrificed herself on this path.”

He said, “When a person adheres to wilayah, he sacrifices himself and not only isn’t he upset but rather, he’s happy on this path. Today, the Islamic ummah is upset due to the martyrdom of Haj Qasem but Haj Qasem sacrificed himself. The late Imam Khomeyni said ‘the more they drag us down, the more our nation wakes up.’”

Hujjat al-Islam Tabatabai said that the awakening of the nation is related to the wilayah and referred to the bravery of the Defenders of the Holy Shrines and the warriors of Islam in the Islamic Resistance Axis and added, “The sacrifices that were given for wilayah today have removed the enemies from the Holy Shrine of Lady Zaynab.”