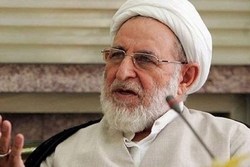 Ayatollah Mohammad Yazdi, the former chairman of Iran's Assembly of Experts, was reelected as member of the Assembly in its midterm voting on Friday.

RNA - Yazdi who was representative of the Central province of Qom's people for the Assembly of Experts garnered 249,130 votes in the province.

The Assembly of Experts is an 88-member clerical body in Iran tasked with monitoring the Supreme Leader's affairs. Candidates must have a certificate of Sharia expertise or pass an exam from the Guardian Council on Islamic jurisprudence to run.

Tens of millions of Iranians headed to the polls to elect 290 members for the Majlis (the parliament) and 7 members of the Assembly of Experts in its midterm elections on Friday morning.

Candidates from across the political isle were vying for 30 parliamentary and 3 Experts Assembly seats in the capital.

Long queues of people were reported in different cities and towns of Iran, including the capital, Tehran.

Iranian Interior Minister Abdolreza Rahmani Fazli had announced last Saturday that 54,611 polling stations across the country would open on Friday in 208 electoral regions, saying the ballot papers have been designed with 10 security indices to prevent any fraud.

According to the interior minister, there are 57,918,159 eligible voters in the parliamentary elections on Friday, including around 3 million people eligible to vote for the first time.

Law Enforcement Police forces and (Basij) voluntary forces have been entrusted with establishment of security in different cities and towns during elections hours.

Last Tuesday, Ayatollah Khamenei called on people to go to the polls.

"Elections are a source for strengthening the country. Look at how US propaganda seeks to separate the people from the Islamic system. They create think tanks to plot this. They seek to distance the Iranian youth from the Islamic system, but they won’t succeed," Ayatollah Khamenei said, addressing a large number of Iranian people from East Azarbaijan province in Tehran.

"Iran should become stronger; this frustrates the enemy. One manifestation of strength is having a strong Majlis. The more participation there is in the election, the stronger the Majlis will be. This is one factor for strengthening the Majlis," he continued.

Meantime, the Iranian interior minister said last Saturday that a runoff vote for the parliamentary seats will be held on April 17 if the candidates fail to garner enough votes on Friday.

According to Fars News Agency, a total of 57,918,000 people were eligible to cast their ballots, therefore; there would be one lawmaker at the parliament per each 190,000-strong segment of the Iranian population.

A total of 7,148 candidates, including dozens of Iranians from the religious minorities, were running for the parliament.

In capital Tehran, 1,335 candidates were contesting one of the 30 allocated seats on the legislature.