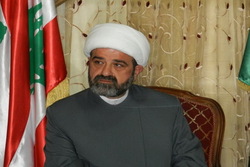 Lebanon’s Soor Mufti expressed that the Issue of Palestine was significant component of Imam Musa Sadr’s religious and political ideology.

Describing Imam Musa Sadr a unique school, he stated, “He was a combination of policy and religion who emphasized the peaceful coexistence of people belonging to different tribes.”

Hujjat al-Islam Hassan Abdullah further noted,” The Issue of Palestine was a highly significant component of Imam Musa Sadr’s religious and political ideology. What has recently happened in Palestine showed that this country needs continuous moves in individual and social areas and that Palestinians should be backed.”

0
0
Answer
احسنتم
Please type in your comments in English.
The comments that contain insults or libel to individuals, ethnicities, or contradictions with the laws of the country and religious teachings will not be disclosed