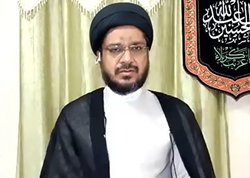 Hujjat al-Islam Hasan said, “Imam Khomeyni breathed new life into the lives of the people ‎to fight against the arrogant powers of the world, such that we are witnessing the decline of ‎the United States.”‎

RNA – In an exclusive interview with Rasa News Agency, Hujjat al-Islam Sayyed Mohammad ‎Zaki Hasan, a teacher at Amir al-Muminin Seminary in Mumbai, India referred to the ‎character and personality of Imam Ruhollah Khomeyni, the leader of Iran’s 1979 Islamic ‎Revolution, and said, “Imam Khomeyni was considered a universal and eternal personality. ‎Through his practical tradition, he bestowed a new life and courage to the oppressed and the ‎deprived people of the world to face the oppressors.”‎

The Indian scholar called Imam Khomeyni a transnational and influential figure, adding, ‎‎“Some figures, such as Imam Khomeyni, have created history and capital for the history of ‎humanity and he was considered a source of pride for humanity.”‎

Hujjat al-Islam Hasan added, “Imam Khomeyni was one of the world’s leading figures whose ‎revolutionary personality had penetrated all of the countries of the world in such a way that ‎he had influenced everyone.”‎

His Eminence emphasized, “The actions of the late Imam were so extensive that they can’t ‎be counted but for example, I can point to his action to strengthen and stabilize Islam on a ‎global scale.”‎

Referring to the courageous actions by the founder of the Islamic Republic of Iran against ‎the arrogant powers of the world and his support for the oppressed and deprived people ‎throughout the world, he said, “Justice-seeking movements and oppressed nations were able ‎to resist the tyrants and arrogant powers by following the late Imam.”‎

Hujjat al-Islam Hasan emphasized that the name of Ayatollah Sayyed Ali Khamenei, the ‎Supreme Leader of the Islamic Revolution, is on the tongues of the oppressed people of the ‎world, which can be considered as a blessing and achievement of the Islamic Revolution, he ‎said, “Today, we see that in front of the White House, the centre of oppression in the world, ‎the name of Ayatollah Khamenei is being chanted. People are chanting slogans in support of ‎Iran and burning the American flag, all thanks to the order of Imam Khomeyni, who said ‎‎‘America will be destroyed.’”‎
‎ ‎
In conclusion, he said, “We convey thousands of our salutations to the great leader of ‎humanity who breathed new life into the human body and encouraged the people of the ‎world to stand up against oppression.”‎