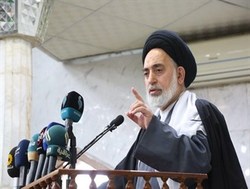 Hujjat al-Islam al-‎Qubanchi said, “The United States is collapsing and we must be ‎vigilant against the seditions of the Zionists.”‎

RNA – In his Friday prayer sermon delivered to a large and fervent crowd of believers ‎in the ‎Iraqi city of Najaf’s Fatimah al-Kubra ‎Husayniyah, Hujjat al-Islam Sayyid ‎Sadruddin al-‎Qubanchi said, “This is a good time to strengthen relations between Iraq ‎and Iran and [Iraqi] Prime Minister’s [Mustafa al-Kadhimi] visit to Iran is the right step ‎and we hope that the Iraqi people will see positive effects in strengthening political, ‎economic and cultural relations while maintaining the independence of the two ‎countries.”‎

Regarding the arrival of Muharram, he said, “I expect all the dear ones to keep these ‎days alive by observing the hygiene rules and I thank the medical staff who make great ‎efforts and I expect the preachers on the pulpits of Imam al-Husayn to present their ‎programs through social networks to commemorate Muharram.”‎

Hujjat al-Islam al-‎Qubanchi referred to the demonstrations that took place due to the ‎power outage in the 50 degrees heat in Iraq and said, “I call on the security forces to ‎deal peacefully with the demonstrators and I also call for the release of the Iraqi ‎prisoners who were detained during the protests due to COVID-19 (Coronavirus).”‎

In another part of his sermon, His Eminence stated, “The United States has seen its ‎largest budget deficit in the past month at $864 billion, in addition to internal unrest ‎and military intervention in the crackdown on American protesters, as well as shaky ‎relations with Europe, China and Russia, all of which indicate the collapse of the ‎American government.” ‎

He said, “The Saudis have crossed all the red lines and are seeking to normalize ‎relations with the Zionist regime, such that in an article by the dean of the department ‎of Comparative Jurisprudence at Imam Muhammad ibn Saud Islamic University, we ‎come across the issue (“Saudi Jews and Muhammad’s Persecution of Them”). This article ‎mentions that the Holy Prophet was the enemy of the Jews and that they were the ‎original inhabitants of the Arabian Peninsula, and called for the resettlement of the ‎Jews in Makkah and Madinah.”‎
‎
Hujjat al-Islam al-‎Qubanchi added, “We call on the Iraqi people to be more vigilant and ‎cautious about these Zionist seditions.”‎