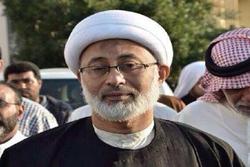 Bahraini authorities are reportedly preventing an imprisoned Shi’ah Muslim cleric from ‎receiving appropriate medication and obstinately refusing to allow him to have a much-‎needed surgery.‎

RNA – The family of Shaykh Mirza al-Mahrous has voiced grave concerns over the wellbeing ‎of the ailing cleric after his health condition worsened, and officials at the notorious Jaw ‎Prison, south of the capital Manama, prevented him from undergoing an emergency ‎operation, Arabic-language and independent Manama Post online newspaper reported on ‎Tuesday.‎

The family said they “received a phone call from him on Sunday, May 3, 2020, informing ‎them of deterioration of his health condition due to the Irritable Bowel Syndrome (IBS), and ‎that the medicine he takes does not work and cannot ease symptoms.”‎

Shaykh al-Mahrous told them he urgently needs to have a surgery as diagnosed by a ‎specialist, but the Jaw Prison administration deliberately refuses to transfer him to hospital.‎

The Shaykh is among a group of opposition leaders, rights activists, bloggers and Shi’ah ‎clerics arrested in connection with their role in the mid-February 2011 popular uprising against ‎the ruling Al Khalifah regime.‎

He was the vice president of the now-dissolved al-Zahra Society of Orphans prior to his ‎arrest.‎

A Bahraini court found the detained opposition figure guilty of “attempting to overthrow the ‎regime” and subsequently sentenced him to 15 years in prison.‎

Shaykh al-Mahrous has frequently gone on hunger strike in protest at prison authorities’ ‎delay in his treatment and denial of the necessary health care in light of his chronic colon ‎disease.‎

Anti-regime Bahraini protesters have been staging almost daily demonstrations in the tiny ‎Persian Gulf kingdom ever since a pro-democracy uprising began there several years ago.‎

The demonstrators are calling for the ouster of the Al Khalifah regime and establishment of a ‎just and conclusive system representing all Bahraini nationals.‎

The Manama regime, in return, has ignored the calls and is pressing ahead with its heavy-‎handed crackdown and persecution of human rights campaigners and political dissidents.‎

Moreover, Bahrain’s parliament approved the trial of civilians at military tribunals on March 5, ‎‎2017. The move drew widespread condemnation from human rights bodies and activists, and ‎was described as imposition of an undeclared martial law across the country.‎