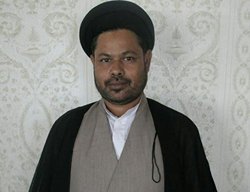 Hujjat al-Islam Zaidi said, “Ayatollah Amini was one of the academic figures of the Islamic ‎Seminaries and had valuable works. This pious scholar had a special concern for the ‎people.”‎

RNA – In an exclusive interview with Rasa News Agency, Hujjat al-Islam Sayyed Hamid al-‎Hasan Zaidi, the president of the al-Uswah Foundation of Sitapur [in the state of Uttar ‎Pradesh, India], expressed his condolences on the passing of Ayatollah Ebrahim Amini to the ‎Supreme Leader of the Islamic Revolution, Ayatollah Khamenei, and the Islamic Seminaries ‎of Qom and His Eminence’s family.‎

The teacher in the Islamic Seminaries of India stated, “This pious scholar was one of the ‎academic figures of the seminaries and had written valuable works. Ayatollah Amini was one ‎of the pious figures who had great concern for the people.”‎

Hujjat al-Islam Zaidi added, “I often prayed Maghrib and Isha prayers in the shrine of Lady ‎Fatimah al-Ma’sumah behind Ayatollah Shobeyri-Zanjani and sometimes in the Grand Mosque ‎under behind Ayatollah Amini. In 2003, after I was asked to translate his book ‘The Models ‎of Virtue,’ I went to him to get permission after Maghrib and Isha prayers but I was terrified ‎because I was in the service of such a great personality with senior managerial positions, ‎including his role as the Friday prayer leader of Qom at that time. Therefore, I was worried ‎that he would not allow it but when I arrived in his presence, he replied to my salam and I ‎told him ‘I am at your service. I want to translate your book. Will you allow me?’ Without ‎any hesitation, he allowed it with full compassion and encouraged me.”‎

Referring to Ayatollah Amini’s interest in the people, he said, “As far as I understood from ‎Ayatollah Amini’s Friday prayer sermons, his statements were related to various issues and in ‎accordance with the requirements of the time and he introduced the people to the ideals of ‎Islam and the Islamic Revolution and where necessary, he warned government officials and ‎always pursued the people’s problems.”‎

While referring to Ayatollah Amini’s method of writing books, he stated, “When I saw his ‎books, I realized that he was careful enough to research and explain the issues he raised. ‎For this reason, I can say that he was a very academic person in his blessed life and a ‎guardian of the Islamic Revolution.”‎

Hujjat al-Islam Zaidi pointed to the reason for the translation of Ayatollah Amini’s book and ‎said, “I was affiliated with a religious organization that decided to prepare a curriculum for ‎high school youth. On the other hand, the Organization of Schools and Seminaries Abroad ‎also had a plan for short-term programs for public school students. These two organizations ‎considered the book ‘The Models of Virtue’ suitable for teaching in these courses and when I ‎read this book, I saw that they have raised the necessary issues for the Urdu-speaking ‎community in a very simple language.”‎