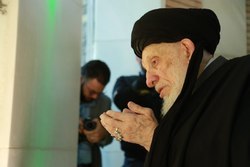 The office of Ayatollah Hakim declared its readiness for holding Arbaein ceremony of this year.

According to the correspondent of Rasa News Agency in Najaf Ashraf, the office of Ayatollah Sayyed Muhammad Saeed Hakim, a source of emulation based in Najaf Ashraf, issuing a message, declared its readiness for holding Arbaein ceremony and announced that the slogan of this year is “From the Sea to the Killing Place”.

The department responsible for religious affairs of Ayatollah Hakim’s office has announced that the activities of this office extend from Ras al-Bisha in Basra to Karbala.

It is necessary to note that Arbaein is 40 days after the martyrdom of Imam Hussein (AS), on 20th of Safar month.