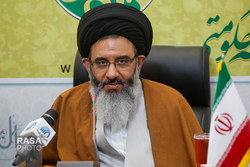 RNA - The representative of supreme leader to Syria, Hujjat al-Islam Sayyed Abolfazl Tabatabaei, delivering the sermons of this week Friday prayer, held in the holy shrine of Hazrat Zaynab (S) in Damascus, expressed condolences on the martyrdom of Imam Hussain (AS) and Imam Sajjad (AS) and then stated, “A good criterion for knowing people is their behaviour in the face of problems, and Imam Sajjad (AS) excellently put up resistance and exercised patience despite all difficulties and problems.”

He added, “Imam Sajjad (AS) managed to frustrate the plots made by Ummayads for creation of intellectual, belief and cultural diversions. He did his best for the revival of the original Islam and also fostered the links between people and Heaven through prayers and supplications.”

Finally, the representative of the supreme leader to Syria said, “It is the path of Hussain having remained unchanged and lasting, and exactly as Imam Khomeini said, we owe whatever we have to Muharram and Saffar.”