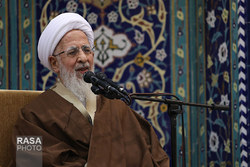 Ayatollah Javadi Amoli, stressing the maximum increase of state’s defensive power, maintained, “The country had best enjoy strong military forces and weapons so that no one could dare to attack.”

RNA - Ayatollah Javadi Amoli, in his weekly course of ethics, held in the presence of a group of the army staff in Ahmad Abad of Damavand, stated, “The homeland, its borders and assets should be protected strongly so that it enjoys long-term peace.”

He reiterated, “As Heaven has mentioned, your preparedness should fear the enemy! You are not going to carry out any attack, yet, be cautious that if the enemy dares to attack, stand against it strongly.”

Finally, he further noted, “The increase of the defensive military power of the country is our duty, and you are supposed to be fully prepared so that no one could dare to attack us.”