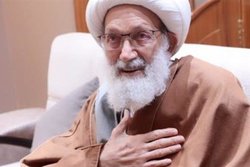 Bahrain’s most senior Shiite cleric lashed out at Washington and its European allies for paradoxical words and actions in dealing with the Universal Declaration of Human Rights (UDHR).

RNA - Addressing a conference under the heading “American Human Rights from the Supreme Leader’s Perspective” in a seminary school in Iran’s city of Qom on Wednesday, Sheikh Isa Qassim said, “There is a wide distance between what the US and Europe say about the UDHR and the way they act in this regard.”

The grand cleric lamented that many Arabs are being put in prisons for just calling for their rights, and at the same time, the US is supporting the Arab dictators.

Early in May, it was announced that 12 prison guards in Bahrain have been charged with physically assaulting inmates, as the ruling al Khalifah regime presses ahead with its heavy clampdown on political dissidents and pro-democracy activists in the tiny Persian Gulf kingdom.

In March, a court in Bahrain handed down prison sentences to 167 anti-regime protesters as the al Khalifah regime does not shy away from its heavy clampdown on political dissidents and pro-democracy activists in the tiny kingdom.

According to Massoud Shadjareh, a member of the Islamic Human Rights Commission, the al Khalifah regime is managing to get away with its crimes because the United States and Britain are more concerned of having their military bases in Bahrain than the lives of ordinary people.