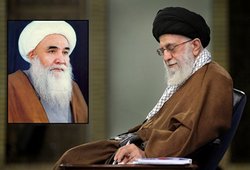 Following the decease of Ayatollah Mohaqeq Kabuli, the supreme leader of the revolution, sources of emulation, and chairmen of Executive and Judicial Branches, issuing separate messages expressed condolences over the decease of this scholar.

RNA - The following is the recapitulations of their messages:

Ayatollah Khamenei: Supreme leader of the Revolution: I extend condolences over the decease of Sheikh Qurbanali Muhaqeq Kabuli to all Afghan brothers, especially his family, followers, students and those interested in him, and pray he may attain the highest ranks and mercy before the Heaven.

Ayatollah Makarem Shirazi: The sad news of Ayatollah Muhaqeq Kabuli’s decease was a source of much sorrow and grief. He was a kind scholar interested in serving the humanity. He never meddled with Iranian affairs and went the straight path. Indeed, the Afghan scholars lost a great source of supports.

Ayatollah Nouri Hamedani: I received the sad news on the decease of Ayatollah Muhaqeq Kabuli.  He was a Mujahid scholar, trained by Najaf and Qom seminaries. He dedicated his noble life to the promotion of Ahl al-Bayt’s culture. I extend condolences to his followers, Afghan people and seminaries.

Chief Justice of Iran, Hujjat al-Islam Raeesi: We belong to Allah and to Allah we shall return. I convey condolences to the seminaries and followers of the pious scholar, Ayatollah Haj Sheikh Qurbanali Muhaqiq Kabuli. He was an invaluable capital for the Iranian and Afghan seminaries. I pray he may attain the highest Heavenly positions and mercy.

Iranian President, Hassan Rouhani: This Faqih dedicate the whole of his blessed life to the introduction and promotion of Ahl al-Bayt’s culture and education of the Islamic sciences in seminaries. I extend condolences to the seminaries, his family and Afghan people, and pray God may provide him with the highest ranks and mercy.