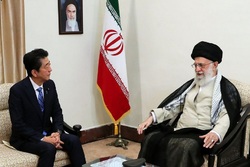 Leader of the Islamic Revolution Ayatollah Seyyed Ali Khamenei dismisses US President Donald Trump as a person not worthy of a response or a message, stressing that negotiations with Washington cannot help solve any problem.

RNA - Ayatollah Khamenei made the remarks in a Thursday meeting with Japanese Prime Minister Shinzo Abe, who told the Leader he was carrying a message from the US president.

“We have no doubts about your (Japan’s) goodwill and seriousness, but regarding what you quoted from the US president, I personally do not consider Trump worthy of exchanging any messages with, and do not have and will not have any response for him,” the Leader told Abe.

The Leader said Iran has “no trust” in the United States and will not at all “repeat the bitter experience” it gained from the negotiations that led to the conclusion of a 2015 nuclear deal, which Washington later ditched.

“Iran engaged in talks with the US and the Europeans for some five or six years, and achieved a result. The Americans, however, breached a done deal,” said the Leader, emphasizing that no wise man would enter talks with a country that has reneged on all agreements.

Ayatollah Khamenei further rejected as “a lie” Trump’s claim that he was not after regime change in Iran, saying if the US president were able to bring about such a change, he would definitely go for it.

The Leader dismissed Washington’s claim of readiness for “honest negotiations” with Tehran, saying “honesty is highly scarce among American statesmen.”

Ayatollah Khamenei pointed to Trump’s talks with Abe on Iran in Tokyo ahead of the Japanese premier’s trip to Tehran, saying “Right after returning home, he (the US president) announced sanctions on Iran’s petrochemical industry.”

“Is that a message of honesty? Does that show that he (Trump) seeks honest talks?” the Leader asked.

The Leader also reaffirmed the Islamic Republic’s firm opposition to the development and use of nuclear weapons.

“I have issued a fatwa (religious decree) prohibiting the production of nuclear weapons, but you need to know that if we were after building nuclear arms, the United States could not do anything about it,” Ayatollah Khamenei said.

The Leader emphasized that Washington is in no position to decide which country can be in possession of nuclear arms while it is, itself, stockpiling several thousands of nuclear warheads.

Ayatollah Khamenei welcomed Abe’s proposal for enhancing Tehran-Tokyo relations and said, “Japan is an important country in Asia and it should display a firm resolve for enhanced ties with Iran.”

Following the meeting, Abe told reporters in Tehran that Ayatollah Khamenei had “made a comment that the country will not and should not make, hold or use nuclear weapons, and that it has no such intentions.”

The Japanese prime minister also said that he regarded the Leader’s belief in peace “as a major progress toward this region’s peace and stability.”