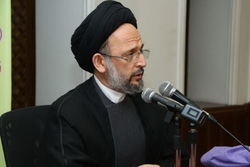 The Friday prayer leader of Beirut stated that upon the construction of the state, the Christians ought to seek the fulfillment of the rights of the Muslims and the Muslims should want the same for Christians.”

RNA - The Friday prayer leader of Beirut, Hujjat al-Islam Sayyed Ali Fazlollah, in ceremony held for commemoration of Shahid Hassan Ali Farhat in a Hussainia in Tripoli, criticizing those making deals on the religion for their own interests, said, “If we leave the state as it is now, each person will attempt to take it to his own desired direction, and consequent, struggles and disputes won’t come to an end.”

Saying that the development of the state around the national interests is a public responsibility, he stated, “Those who spout on religion should honestly exercise its instructions, as the religion invites to kindness, mercy, morality and humanity.”

Beirut Friday prayer leader finally explicated, “Upon the construction of the state, the Christians ought to seek the fulfillment of the rights of Muslims and Muslims should want the same for Christians, however some regard the country as a milking cow.”