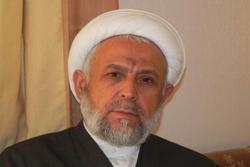 The chairman of the Lebanese Soor Scholars reiterated, “Islamic Republic of Iran won’t surrender to what is asked by the US, as it is backed by a wise leader and free people.”

RNA - Hujjat al-Islam Ali Yasin, the chairman of the Lebanese Soor (Tyre) Scholars, delivering a speech, said, “In the Islam and Arab world, happiness of Eid won’t be completed until the freedom of Palestine.”

Commending the courage of the Palestinian people against the enemies, he added, “Arab and Muslim countries ought to stand against the plans of the US and the Zionist Regime, especially, on these days, as they are the anniversary of the Six Day War, occurred in 1967, leading to the occupation of some Arab areas.”

The chairman of the Lebanese Soor Scholars criticised the silence of the international organisation over the activities of the Zionist Regime modifying the borders of Lebanon and Palestine and then stated, “The International Organisations should pressure the enemies so that the war against Yemen will be finished.”

Pointing to the recent actions of the US against the Islamic Republic of Iran, he said, “Such pressures won’t debilitate the determination of Iran for achieving its ideals, as this country enjoys a wise leader and free people.”

Regarding the terrorist attack of this week against the Lebanese security forces and army in the city of Tripoli, he maintained, “This bitter event should lead to the better performance of the officials and better defence of the country.”

It is noteworthy that in this week, the Lebanese security forces were targeted with a hand-made bomb in Tripoli, an attack followed by some severe shooting by the security forces and then the blowing up of attacker by himself.