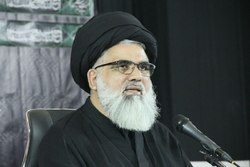 Rasa – Hujjat al-Islam ‎Naqvi ‎said that Imran Khan visited Iran last week and has become ‎very popular in the news. There has been no other ‎trip of his or any of his cabinet minister ‎which has received this much coverage and ‎popularity. ‎

RNA – In his Friday prayer sermon delivered to a large and fervent crowd of believers in ‎‎the‎ ‎‎‎‎‎‎‎‎‎Pakistani city of Lahore, Hujjat al-Islam Sayyed Jawad ‎Naqvi ‎referred to the visit by the ‎Prime Minister of Pakistan, Imran Khan, to Iran last week and said, “Our Prime Minister ‎visited Iran last week and has become very popular in the news. There has been no other ‎trip of his or any of his cabinet minister which has received this much coverage and ‎popularity. The previous leaders of Pakistan who have visited Iran past didn’t receive the ‎same amount of coverage that Imran Khan has received.”‎

The principal of Jami’at Urwat ‎‎al-Wuthqa Islamic ‎Seminary in Lahore ‎added, “This visit was ‎spoken of before the start of the visit. This visit was essential as Iran and Pakistan are two ‎border countries and there are many issues occurring in the border region. Certain countries ‎were provoking border conflicts between these two countries, such as India, which seeks to ‎aggravate the Iran-Pakistan border issue. More than this, Saudi Arabia is interested in making ‎the borders insecure. The Pakistani port of Gwadar has been formally handed over to China ‎but still Saudi has talked about building a refinery in Gwadar, though they won’t build it.”‎

He said, “On the other hand, India has taken over operations at Iran’s strategic Chabahar ‎port. The enemy of Iran, namely Saudi Arabia, has taken control of ‎Pakistan’s port of ‎Gwadar, and the enemy of Pakistan, namely India, has taken control of the Iranian port of ‎Chabahar. Both of these ports are very close to each other. In order to reduce these ‎conflicts it was necessary for one to make such a visit. Iran and Pakistan both have a form ‎of politics. Iranian politics is completely anti-American and Pakistani politics is friendly with ‎the United States and Saudi Arabia. Iran is under sanctions and hence they need Pakistan.”‎

Hujjat al-Islam ‎Naqvi said, “Due to the sanctions imposed on Iran, all trade contracts ‎between Pakistan and Iran has ended but now, a new negotiations have started for an ‎independent trade deal between the two countries. This wasn’t acceptable by the United ‎States and Saudi Arabia in any means. From a security perspective, a responsible person ‎must visit there to reduce this conflict. The second objective was trade because there was ‎no trade occurring between the two border countries. Recently, Pakistan has only engaged in ‎formal trading worth $50,000 with Iran but this is because there is a lot of smuggling ‎happening on the border. Goods are being smuggled from Iran into Pakistan and the ‎markets of Pakistan are full of oil, construction goods etc. Therefore, the second purpose ‎was to make an independent trade deal with Iran.”‎

His Eminence also referred to the terrorist attacks in Sri Lanka on Easter Sunday and said, ‎‎“Sri Lanka is a neighbour of India and has been a victim of a long civil war. There are two ‎main ethnic groups in Sri Lanka – the Sinhalese and the Tamil people. The Sri Lankan Hindu ‎Tamil community is connected to Indian Tamils. Tamils sought independence from the ‎Sinhalese and there was a almost 26-year-long bloody civil war which destroyed Sri Lanka. ‎Hundreds of thousands of people died and there were big losses in regard to property and ‎life.”‎

He said, “For many years, there was a peace agreement due to international intervention ‎and now, terrorism has started again. It’s grievous that how such innocent people, amongst ‎them men, women and the elderly, became victims of this. This attack which took place, as ‎per news reports, that American and Indian secret services warned Sri Lankan agencies that ‎these attacks were going to occur but the Sri Lanka government didn’t take it seriously and ‎the outcome was this terrorist attack.”‎

Hujjat al-Islam ‎Naqvi ‎stated, “Immediately after this, the President of Sri Lanka, Maithripala ‎Sirisena, changed all the security services forces. They are blaming them for negligence but ‎it’s possible they were all involved. When they knew that such big attack was going to ‎happen and no one took any caution, they didn’t raise any alert and they didn’t inform the ‎president and cabinet. First of all the agency didn’t knew, and when they were told also they ‎didn’t react. This shows this was a big plan.”‎