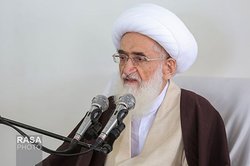 The senior source of emulation emphasized that the strategy to strengthen the Islamic ‎Resistance Front is to reproduce the unifying teachings of the school of thought of Shahid ‎Soleymani.‎

RNA – In a message to the second symposium of Islamic Resistance parties and groups, which ‎was held online on August 11, Grand Ayatollah Hoseyn Nouri-Hamadani, a renowned source of ‎emulation, emphasized, “The expulsion of the United States from the region will be one of the ‎dimensions of God’s severe revenge on the enemies of Islam and by reproducing the unifying ‎teachings of the school of thought of Martyr Qasem Soleymani, it will be considered a strategic ‎principle in strengthening the Islamic Resistance Front.”‎

Praise be to God, the Lord of the worlds and salutations and peace be upon our ‎Master Muhammad and his Pure Household

Salutations and greetings to this esteemed assembly and congratulations of the Ten ‎Days of Wilayah (Guardianship) and Eid al-Ghadir.‎

We live in an age where the arrogant powers are constantly fanning the flames of discord and ‎division in the Islamic world but the global resistance of justice-seeking systems, with the ‎irreplaceable role of Martyr Qasem Soleymani, has borne the sweet fruit of destroying Daesh ‎and defeating the supporters of terrorism in the region.‎

After the victory of the Islamic Resistance Front, Donald Trump, who did not want to be a loser ‎in the war, tried to bury the story of Haj Qasem [Soleymani] in history by assassinating him, ‎but in practice, he was defeated and now he is faced with the universal hatred of the people of ‎the world and the international slogan of the people for the vengeance of General Soleymani ‎that the inevitable expulsion of the United States from the region will be one of the dimensions ‎of God’s severe revenge on the enemies of Islam.‎

Regardless of this issue, one should think about how the authority of the Islamic Resistance ‎continues in order to achieve a new Islamic civilization in the post-Soleymani years and was ‎guided by the strategic question of how to act in the intellectual and scientific confrontation ‎with the United States and its allies because the continuation of victories and the continuation ‎of the growing power of the Islamic Resistance Front is a software category and along with the ‎modernization of the hardware of the countries in the region, scientific and theoretical ‎modernization must be emphasized in order to achieve a new Islamic civilization.‎

In the meantime, the reproduction of the unifying teachings of the school of thought of Martyr ‎Soleymani is a strategic principle in the unity of the Islamic ummah, strengthening the Islamic ‎Resistance Front‎ and accelerating the demand for a new Islamic civilization.‎

In explaining this issue, it should be said that the unity of the Islamic ummah is one of the vital ‎factors for the flourishing of the Islamic civilization. Reflection on the signification of General ‎Martyr Haj Qasem Soleymani shows that the great martyr considered his position as the ‎sacrifice of Muslims and the general public, and thus General Soleymani became an indicator ‎and a myth for the Islamic ummah during his struggles against Daesh.‎

Also, the realization of modern Islamic civilization depends on a positive and constructive ‎confrontation with the multifaceted world of graduates of different ethnicities, languages, ‎cultures and religions in Islamic countries and other human societies and this principle is also ‎formed in the light of the principle of migration in the context of culture-centredness, ‎interactionism and pacifism.‎

Martyr Soleymani followed Imam Khomeyni who said, “Our revolution is not limited to Iran” and ‎the Supreme Leader of the Islamic Revolution left his homeland to form a front of right against ‎wrong with borders and crossed the borders of ethnicity, race, nationality and even religion and ‎in addition to the Shi’ahs, he defined his cosmopolitanism in terms of interfaith interactions with ‎Sunni brothers and even followers of other divine religions, especially Christians in the region, ‎in order to establish front without borders against American oppression and Takfiri terrorists.‎

Yes, the semantic and civilizational horizon of Martyr Soleymani was not dedicated to specific ‎ethnicity, religion, nationality or self-made human borders but rather the connection of the ‎Islamic world and other human societies to the Imamate, through inter-religious knowledge and ‎jurisprudence, was the most important epistemological form of this international resistance.‎

In fact, the monotheistic basis of General Soleymani in anti-oppression struggles is strongly tied ‎to the element of wisdom, imamate, guardianship and jurisprudence, so according to the verse: ‎‎“Muhammad, the Apostle of God, and those who are with him are hard against the faithless ‎and merciful amongst themselves” [48:29]. He did not suffer from violence but with ‎jurisprudential wisdom and rationality, he broke the atmosphere of anti-approximation and thus ‎tried to form a new Islamic civilization by paying attention to the cultural geography of unity ‎and recognizing epistemological commonalities.‎

Undoubtedly, the martyrdom of Sardar Soleymani put new blood in the veins of the resistance, ‎but more importantly, it is the school of thought and knowledge of Martyr Soleymani that has ‎shaped the glorious worldview of the structure of civilization in the Islamic world and will outline ‎the global framework of modern Islamic civilization.‎

In conclusion, I would like to thank all the organizers of this meeting, especially the ‎Revolutionary Party with the precedence of the Islamic Coalition Party, and especially Mr. ‎Asadollah Badamchian.‎

I pray God Almighty for the success of everyone.‎