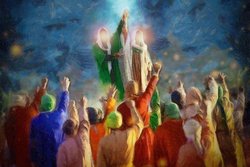 RNA ‎–‎ One issue is about Ghadir itself. In some narrations, it has been said that Eid al-Ghadir is the ‎eid of God the Great and that it enjoys a status which is higher than all other Eids. What is the ‎reason for this? Well, in the Holy Quran there are ayahs which can only be matched with the ‎issue of Ghadir, not with any other issue.‎

There is a well-known ayah which says, “This day have those who reject faith given up all hope ‎of your religion, yet fear them not but fear Me. This day have I perfected your religion for you, ‎completed My favour upon you, and have chosen for you Islam as your religion” [The Holy ‎Quran, 5:3]. This ayah is at the beginning of Surah al-Maeda and it is not compatible with any ‎issue other than the issue of Ghadir in terms of weight, significance and value.‎

Only such an issue can match the sentence “This day have those who reject faith given up all ‎hope of your religion.” Those who have questioned the content of these ayahs and those who ‎make certain comments in rejecting this issue – the opponents of Ghadir and those who do not ‎believe in it – have interpreted this ayah in certain ways, but this part of the ayah cannot be ‎interpreted otherwise. Today is a day that the enemies – kuffar – have become disappointed ‎with your religion. What has been added to the religion that has disappointed the enemy? How ‎significant are the religious rules that have appeared in this ayah and in the beginning of Surah ‎al-Maeda both before and after this part of the ayah?‎

This part of the ayah does not refer to daily prayers, zakat and jihad, nor does it refer to any ‎peripheral rule:“This day have those who reject faith given up all hope of your religion.” So, ‎there is another issue involved, one that is not related to the religious rules that have appeared ‎in the Surah. What is that issue?‎

It is the issue of the leadership of the Islamic community. It is the issue of government and ‎imamate in the Islamic community. Of course, it was possible that Muslims would not obey this ‎edict and actually they did not do so! For several centuries, the Umayyad, the Abbasid and ‎other such groups lived like kings and ruled over the people in the name of imamate, caliphate ‎and the like. However, this does not harm the philosophy of Ghadir.‎

And it is clear who it refers to. The Commander of the Faithful is a person whose personality ‎and status as God’s representative of Quranic concepts and teachings cannot be blemished by ‎anyone living either in those times or afterwards. Well, they used to curse him, but they even ‎curse God and the Holy Prophet - I seek God’s protection. Cursing someone is not a good ‎reason for rejecting them. When everyone thinks, when everyone abandons their biased ‎feelings, they can not cause the least amount of damage to this enlightened and sacred body. ‎The Holy Prophet chose that person as the embodiment of imamate. This became a regulation.‎

Until the end of the world, whenever Muslims want to be guided by God so that they implement ‎Islam and achieve the Islamic community, this will be the rule and the regulation:they should ‎revive imamate. Of course, they can never get close to any of the criteria and standards that ‎the Holy Prophet announced. They cannot even get close to lesser degrees. If we want to ‎compare our greatest scholarly, spiritual, mystic and philosophical personalities with the ‎Commander of the Faithful, they are like a faint ray of light that one sees at the bottom of a ‎well. Now, compare this with the sun. Of course, they are the same and they have the same ‎radius, but what is the distance? How different they are from each other?‎

If we want to compare our best personalities – for example, a personality like our ‎magnanimous Imam who is truly a complete, great, magnificent, and comprehensive ‎personality and who is an outstanding and unique person in every area – with the Commander ‎of the Faithful , this comparison will be like what I said. You should compare sunlight with the ‎ray of light that is seen at the bottom of a well or in the corner of a storeroom which comes ‎from the sun itself. This is how distant and different they are from one another.‎

When this regulation was issued, then “This day have those who reject faith given up all hope ‎of your religion.” When it was issued, the enemies lost all hope of changing the path of religion. ‎This is because the path of religion changes only when the main point and the main nucleus ‎change. If the nucleus of power, management and leadership changes, then everything will ‎change. Of course, in reality, certain changes take place. Certain individuals from Umayyad ‎and Abbasid seized power in the name of Islam, so did Hajjaj ibn Yusuf, but they could not ‎disrupt the regulation.‎

Today, if some people in the world of Islam – those who are familiar with Islamic teachings – ‎refer to the Holy Quran and if they look at the regulations that exist in the Holy Quran about ‎worshipping the Truth, about one’s lifestyle, and the orientation that those nations who worship ‎the Truth adopt, it will not be possible in any way that they reach a conclusion other than the ‎imamate of the Commander of the Faithful and what follows this imamate.‎

This is our claim and we can prove it completely. If anyone in the world of Islam – including ‎intellectuals, thinkers, philosophers and those who have had other beliefs since the first day – ‎chooses the Quran, Quranic values and Quranic regulations for the life of human societies as ‎the main standard, they will not reach any conclusion except that a person like Ali ibn Abi Talib ‎should rule over Islamic societies. This is the path. The path is the path of imamate. This was ‎related to Ghadir.‎

Well, when Ghadir is of such significance, then it becomes clear what the other holy ayah ‎means: “Oh Messenger, deliver what has been revealed to you from your Lord. And if you do it ‎not, then you have not delivered His message” [The Holy Quran, 5:67]. It says that if you do ‎not announce this edict to the people, you have not fulfilled your mission. It was 23 years then ‎that the Holy Prophet had been working hard. All those efforts in Makkah, in Madinah, those ‎wars, those self-sacrificing acts, that strictness about himself and the great guidance that that ‎great personality provided for humans were accomplished during those 23 years. So, what was ‎that event and duty without which, all those efforts would not exist:“And if you do it not, then ‎you have not delivered His message.”‎

This edict could not be related to some peripheral religious rules, rather it was something ‎beyond that. What was it? It was imamate. Who is the first Imam? The Holy Prophet himself. ‎Imam Sadiq (greetings be upon him) said in Mina, “God’s Messenger was the first Imam. Ali ibn ‎Abi Talib was Imam after him” [Kafi, Vol. 4, page 466]. And they were followed by the other ‎Imams. After putting Abraham the Messenger to all those tests, and after he passed through all ‎those difficult stages – he was thrown in the fire in his youth and after that he went to Babylon ‎and other areas and went through a lot of trouble – God the Exalted said to him when he had ‎become old, “I will make you an Imam to the nations” [The Holy Quran, 2:124].‎

He said to him that He wants to make him an Imam. This is what imamate means. This is an ‎ideology, an Islamic ideology which is based on firm principles and irrefutable arguments. We ‎invite the entire world of Islam and all thinkers to this:the unity that the world of Islam needs ‎today can be easily understood by contemplating on Quranic ayahs and truths provided that ‎thinkers and experts pursue such issues. ‎