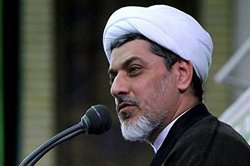 The dean of the history of Islamic Tradition and Civilization at Imam Khomeyni Higher ‎Education Complex named Lady Khadijah, Abu Talib and Hamzah as among the personalities ‎who have been neglected.‎

RNA – Speaking at a press conference International Conference on Hadhrat Hamzah ibn Abd ‎al-Muttalib at Qom’s Imam Khomeyni Higher Education Complex (a campus of al-Mustafa ‎International University), Hujjat al-Islam Dr. Naser Rafiei-Mohammadi offered his ‎congratulations on the beginning of the blessed month of Dhu al-Hijjah and the marriage ‎anniversary of Imam Ali and Lady Fatimah al-Zahra and stated, “In the history of Islam, a ‎few personalities have received little attention and in certain cases, they haven’t been ‎favoured.”‎

The chairman of the International Conference on Hadhrat Hamzah continued, “Lady Khadijah ‎bint Khuwaylid is a personality who isn’t as appreciated as she should be while she was the ‎first wife of the Holy Prophet Muhammad and she lived with the Holy Prophet for twenty-five ‎years.”‎

He stated that in the history of Islam, little attention has been paid to Abu Talib and said, ‎‎“Abu Talib is the defender and the uncle of the Holy Prophet and the Holy Prophet lived in ‎his embrace for many years and is the monotheist of the Quraysh.”‎

The dean of the history of Islamic Tradition and Civilization at Imam Khomeyni Higher ‎Education Complex continued, “Although the verses of the Holy Quran don’t directly mention ‎Hadhrat Hamzah, there are verses that can be easily transferred to the personality of ‎Hadhrat Hamzah, such as the verse, ‘And the Foremost Ones are the foremost ones, they ‎are the ones brought near [to God]’ [56:10-11] because Hadhrat Hamzah is one of your ‎pioneers. Of course, I don’t want to say that this verse is dedicated to Hadhrat Hamzah but ‎he is one of the examples of the verse.”‎

Hujjat al-Islam Rafiei-Mohammadi referred to a narration from the Holy Prophet about ‎Hadhrat Hamzah and said, “The Prophet said that Hadhrat Hamzah is my most beloved ‎uncle. In most of the protests of the Imams, the king of that house is Hadhrat Hamzah. Just ‎as Imam Ali stated in letter 28 of Nahj al-Balaghah [The Peak of Eloquence], ‘he is the best ‎of our martyrs, the best martyr, meaning Hadhrat Hamzah is someone who is mentioned as ‎a special person.”‎

The faculty member at al-Mustafa International University added, “Hadhrat Hamzah’s ‎behaviour, such as his courage, charity, generosity and defence of Islam and religion, all ‎show his personality, but unfortunately in Sahih al-Bukhari the virtues of the relatives of the ‎Prophet, the personalities of Abbas, Zubayr and the son-in-law of the Holy Prophet are well ‎discussed, but Hadhrat Hamzah is passed over.” ‎