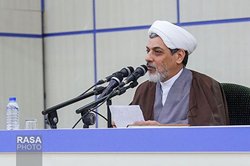 The teacher at Imam Khomeyni Specialized University said the recent crash of Ukraine International Airlines Flight 752 was regrettable and said, “The great services of the children of the nation in the IRGC must not be put under question because of the tragic plane accident.”

RNA – Speaking at a ceremony commemorating the martyrs of the crash of Ukraine International Airlines Flight 752 which was attended by several sources of emulation, scholars and the public at Qom’s Grand Mosque, Hujjat al-Islam Dr. Naser Rafiei said, “In January of this year, there have been several terrible events that affected the dear people.”

He pointed to the martyrdom of a large number of people in a stampede at General Soleymani’s funeral in Kerman, adding, “The martyrs of Kerman sacrificed their lives for the sake of their love for General Soleymani and the line of martyrdom.”

Hujjat al-Islam Rafiei said that the crash of Flight 752 was very sad and added, “The sadness of the plane accident deepened the loss of General Soleymani.”

The teacher at Imam Khomeyni Specialized University (a campus of al-Mustafa International University) in Qom emphasized that human error was involved in the accident and said, “Actions must be properly managed after the plane accident.”

Referring to human error in the Battle of Uhud and the martyrdom of Hamzah ibn Abdul-Muttalib, the Prophet Muhammad’s uncle, His Eminence stated, “In the time of the Prophet, the wave-riding hypocrites sought to exploit this human error.”

He said that those who gathered under the pretext of the tragedy of the plane accident didn’t have grief for the martyrs added, “The rally’s slogans were reminiscent of the sedition of 2009.”

Hujjat al-Islam Rafiei pointed to the humiliation of the United States due to Iran’s missile attack on the Ayn al-Asad Airbase in Iraq on January 7th, adding, “One of the lessons of the recent events is the lack of pride in victory.”

His Eminence considered the protests and complaints of the people regarding the delay in announcing the cause of the plane accident to be rightful and added, “The great services of the children of the nation in the Islamic Revolutionary Guard Corps (IRGC) must not be put under question because of the tragic plane accident.”

He referred to the participation of Robert Macaire, the United Kingdom’s Ambassador to Iran, in an illegal protest in Tehran over the plane accident and said, “We must be careful about abuses of this human error in the plane accident.”