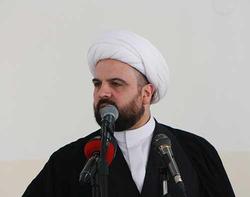 Hujjat al-Islam Ahmad Qabalan said that Lebanon can’t be sold and added, “Some must ‎understand the fact that we Shi’ahs constitute the largest religious group in this country ‎but we are the historical group of Lebanon and its first and main partner.”‎

RNA – In a speech, Hujjat al-Islam Ahmad Qabalan, a leading Lebanese Shi’ah scholar ‎said that Lebanon can’t be sold, “Some must understand the fact that we Shi’ahs ‎constitute the largest religious group in this country, but we are the historical group of ‎Lebanon and the first and fundamental partner in everything that happens in this ‎country and from the time of the Ottoman Empire and the French mandate, we shared ‎in the hard and comfortable days and remained in the majority.”‎

He added, “We Shi’ahs are in the struggle, battle and stability in the majority, but we ‎are among those who liberated the country and guarantee its independence, ‎sovereignty and existence, and defeated the biggest international Zionist occupation ‎and drove it out. We then defeated the onslaught of the largest American international ‎think-tank. We don’t and will never accept any bribe, threat, transaction or visit in the ‎name of selling out the country or the offering of a political gift under any name.” ‎

Hujjat al-Islam Qabalan stated, “Our scholars and martyrs over the past centuries are ‎the biggest reason for our sacrifices on the way to this country. For this reason, we are ‎ready to make bread and we will never accept the sale of the country and some should ‎know that this is no longer news.”‎

Pointing out that the only truth we believe in is that Lebanon belongs to its people, its ‎people and all its religious groups and that they are the family of a single homeland, ‎His Eminence said, “The country of resistance doesn’t accept that Lebanon is the prey ‎of the Zionists or the Americans or their allies and the people of insight are more aware ‎of the colours of the Lebanese flag.”‎

Hujjat al-Islam Qabalan stated, “For the last hundred years, there has been no health ‎for Lebanon and the Lebanese who longed for a homeland, a government and ‎citizenship for Lebanon and the United Nations Security Council and the United Nations ‎have never benefited us, especially when we were fighting in front of their eyes and ‎yours. We will only be under the tent of the homeland.”‎