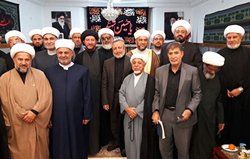 A group of Iraqi scholars said, “They know very well that Ayatollah al-Sistani defended Iraq ‎and the rest of the neighbouring countries, even Saudi Arabia, with the collective jihad fatwa ‎against the terrorist and Takfiri Daesh movement.”‎

This disgusting action led to the reaction of a group of Islamic scholars, whose statement is ‎as follows:‎

In the Name of God, the Most Gracious, the Most Merciful

Once again, we see that the Saudi media has insulted a high-ranking religious authority.‎

Everyone must know that the Saudi and Wahhabi methods are continuously based on ‎sedition and disrespect to the religious authorities, and they will never give up on this ‎method, and everyone must be aware of this.‎

Insulting the sanctities and insulting the people, the holy places and the Iraqi authorities has ‎been their method from the past to the present.‎

The House of Saud used to commit crimes through their Takfiri fatwas and by ordering ‎suicide bombings and their seditionist policies in Iraq and today they insult the Iraqi ‎authorities and scholars. However, we do not see any appropriate response from the Iraqi ‎government to the Saudi regime.‎

With this insulting act, the al-Sharq al-Awsat newspaper revealed the true face of the House ‎of-Saud and demonstrated that it does not respect the great religious authority.‎

They know very well that Ayatollah al-Sistani defended Iraq and the rest of the neighbouring ‎countries, even Saudi Arabia, with the collective jihad fatwa against the terrorist and Takfiri ‎Daesh movement. ‎

We call on the government and parliament to take a formal stand on this issue, and we also ‎call on Shi’ah, Sunni and Kurdish officials to take an official stand in defence of Iraq’s religious ‎authority, independence and greatness.‎

And peace be upon you, ‎
A group of scholars of the Islamic world ‎

The names of the signatories of this statement are as follows:‎