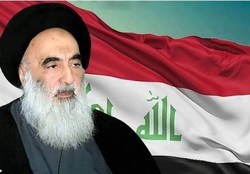 Iraqi officials condemned the publication of an offensive cartoon of prominent Shiite cleric Grand Ayatollah Ali al-Sistani in a Saudi-owned newspaper, saying the depiction stems from the failure of Riyadh's Takfiri plots.

RNA – Hadi al-Ameri, secretary general of the Badr Organization, which leads the Fatah (Conquest) Alliance at the Iraqi parliament, said in a statement on Friday that the Riyadh regime had once again insulted the religious authority and crossed red lines by the blasphemous cartoon at the Saudi-owned London-based daily Asharq al-Awsat newspaper.

The image underestimates the feelings of millions of Shiite, Sunni and Christian Iraqis who are aware of Ayatollah Sistani's role in preserving the country's national sovereignty against the Daesh Takfiri terrorist group, al-Sumaria TV network quoted Ameri as saying, according to Press TV.

He noted that the cartoon shows the Saudi regime's intention to continue its suspicious schemes and hostilities against all those seeking to maintain Iraq's unity.

Takfirism, the trademark of many terror outfits, is largely influenced by Wahhabism that is the radical ideology dominating Saudi Arabia and freely preached by its clerics.

In a post on his Twitter account, Nasr al-Shammari, spokesman for Harakat Hezbollah al-Nujaba group, stressed that the anti-Shiite stance adopted by Saudi Arabia, the US and Israel is not strange.

The Saudis are those who have unjustly shed the blood of Muslims, he wrote, adding that the insult to the Iraqi cleric proves Riyadh's bitter feeling as its Takfiri conspiracies were defeated by the religious authority's wise and firm measures.

Ali al-Asadi, chairman of Nujaba's political board, emphasized that the main reason behind the offensive cartoon was Ayatollah Sistani's fatwa (religious decree) that led to the establishment of Iraq’s Popular Mobilization Units (PMU) or Hashd al-Sha’abi.

In June 2014 – when Daesh unleashed its campaign of terror and destruction in Iraq – Ayatollah Sistani issued a religious edict (fatwa) and called on his followers to rush to the national army’s help in the fight against the Takfiri outfit.

The fatwa helped bring together Shiite fighters, Sunni tribesmen, as well as Christian and Izadi, volunteers under the umbrella of the PMU to reverse Daesh’s gains and ultimately end the terror group’s territorial rule in Iraq in late 2017.

Elsewhere in his remarks, Ali al-Asadi called for the closure of Asharq al-Awsat's office in Iraq.

Back in May, Saudi-funded TV channel MBC insulted late Hashd al-Sha'abi commander Abu Mahdi al-Muhandis. He was assassinated in a US drone attack in January along with top Iranian anti-terror commander Lieutenant General Qassem Soleimani.