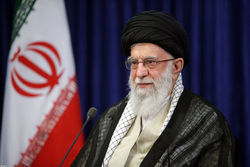 The United States wants ‎you to stop following Islam. Others who follow the United States also seek the same goal. In this confrontation of tyranny and monotheism, the one that the ‎Almighty God has determined to be victorious is the front of Truth.‎

RNA - On the anniversary of the appointment of Muhammad (s) to prophethood, a group of ‎government officials and ambassadors of Islamic countries met with Ayatollah Khamenei - ‎the Leader of the Islamic Revolution - in April 3, 2019. ‎

In this meeting the Supreme Leader of the Islamic Revolution — Ayatollah Khamenei — ‎pointed: The rising of the holy prophets (Bi’that) is aimed at creating a utopian or nearly ‎perfect society and civilization. There is everything in a civilization: science and knowledge, ‎morals, lifestyles, and war. It is not that Islam emerged to obliterate war; no! But the ‎motives of the war are important. War against whom?‎

His Eminence went on to say: In the Quran, there are many instances where ‘the sending of ‎the prophets’ is referred to as Bi’that and rising. Primarily, this rising is for the sake of ‎worshiping God; secondly, it is aimed at rejecting tyranny. Tyranny [taghut] represents all ‎the oppressive and vicious rulers and in today’s world, examples include all the presidents of ‎the United States and some other countries.‎

The Leader of the Islamic Revolution stressed that the arrogant powers of the world launch ‎wars in quest of domination and sustained: The tyrannical powers of the world fight for the ‎sake of their own power, seeking to quench their own desires. The Zionists have been ‎fighting for their vicious goals for many years. However, Hezbollah and Palestinian strivers ‎fight against them. Our nation also fought back during the 8-year-long United States-backed ‎Saddam’s war. This type of war is celebrated because it pursues divine goals. Believers fight ‎too, albeit, for divine goals.‎

When you read the Quran and you are inspired; when the Iranian nation followed Imam ‎Khomeini (ra) and tolerated the hardships, and disturbed a rotten system after some ‎thousand years and built the Islamic system over it, it is the continuation of Bi’that.‎

The Supreme Leader of the Islamic Revolution slammed enemies who oppose the Islamic ‎Republic and held: Those who oppose the Islamic Republic today, are like those who ‎opposed Bi’that [the appointment of the Prophet] at the early years of Islam. Some say, ‘do ‎not make enemies for yourself.’ No, we do not do that. We reiterate the word of Islam; as a ‎result, animosity is roused. The United States wants you to stop following Islam. Others who ‎follow the United States — like the Saudi Regime — also seek the same goal. In this ‎confrontation of tyranny and monotheism, the one that the Almighty God has determined to ‎be victorious is the front of Truth. That is, if you the Iranian nation persist in your efforts, ‎you will certainly defeat the enemy, the United States

Ayatollah Khamenei praised the young among the Iranian nation for their strong ‎determination and motivation and asserted: Our young people today have more motivation, ‎wisdom and preparation compared to the past. That is why I address young people. The ‎young people are ready today to take action in many fronts. Fighting is not only about ‎carrying a gun. We never fight against anyone, as long as they do not attack us. But in other ‎fronts, like the fronts of science, ethics and lifestyle, we move forward and advance. ‎

Finally, Ayatollah Khamenei gave tidings of a brighter future and pronounced: In the matters ‎of economy, culture, and politics, everyone and in particular the youth should be active. The ‎future belongs to the believing and zealous young one who can make this country reach the ‎climax of prosperity with determination and innovation.‎

Faculty member of the Islamic Culture and Islamic Research Centre:‏