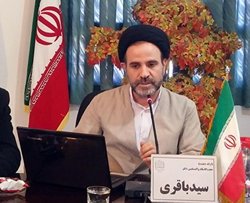 Hujjat al-Islam Sayyed-Baqeri‎ said that the spirit of the Islamic-Iranian Blueprint for Progress ‎is justice ‎and argued, “If in some places and cases the document is not fair or weak, it must ‎be ‎strengthened.”‎

RNA – Speaking at a conference entitled “The Position of Justice in the Islamic-Iranian ‎Blueprint for Progress” which was held at the Culture Hall of the Islamic Culture and Islamic ‎Research Centre, Hujjat al-Islam Sayyed Kazem Sayyed-Baqeri said that the spirit of this ‎document is justice and argued, “If in some places and cases the document is not fair or ‎weak, it must be strengthened.”‎

On October 14, 2018, the Supreme Leader of the Islamic Revolution, Ayatollah Khamenei, ‎released a draft of the “Islamic-Iranian Blueprint for Progress,” a document in which the ‎most important principles and ideals of progress and desired horizons for the next five ‎decades are planned and effective strategies for realizing it are designed. ‎
‎ ‎
The faculty member of the Islamic Culture and Islamic Research Centre said we necessitate ‎the criteria to recognize the inclusion of political justice in this document and noted, “Equality ‎in opportunities and in rights, active participation by the citizens and the benefiting from ‎that, universal freedom, equality of all before the law, the granting of political values ‎appropriate to the activities of the citizens, the adoption and implementation of rules based ‎on reason, transparent and responsible governance, respect for the rights of citizens, even ‎opponents and critics and balances and moderation in political affairs are among those ‎criteria.”‎
‎ ‎
He added that some of these cases are mentioned in the Islamic-Iranian Blueprint for ‎Progress and some are not as they should be. “For example, the most explicit part that ‎deals with political justice is Article 45 which is part of the measures that emphasize the ‎maintenance of religious democracy.”‎

Hujjat al-Islam Sayyed-Baqeri ‎stated that the Islamic-Iranian Blueprint for Progress ‎shows ‎less progress than civil institutions and said, “This document is such that supposedly all the ‎power is given to the government, while the root of many problems is the same point.”‎
‎ ‎
He stated, “Wherever the power of a controlling force can’t be observed, it’s likely to lead to ‎injustice, so instead of the dominating spirit in this document being government-based, the ‎government must be civil society-based or any other name that they want to put there. Of ‎course, this civil society is a civil society based in Islam.”‎

His Eminence added, “Alongside the government, which is an effective institution and planner ‎of justice, what is essential is the commitment of the people to justice and bringing people ‎and colleagues close to each other as is stated in the last verse of Surah Al Imran, when God ‎speaks of patience, that is, everyone in society works together and strives to address justice ‎and the related discussion in this verse is more important than patience.” ‎

Hujjat al-Islam Sayyed-Baqeri ‎explained that unlimited power is the beginning of injustice and ‎said, “In Wilayat al-Faqih al-Mutlaqah (Absolute Power of the Jurisprudent), no one says that ‎the Wali al-Faqih (Guardian-Jurist) has unlimited power, but rather it’s said that the powers of ‎the Wali al-Faqih ‎are wide enough to implement the affairs of the society and implement ‎Islamic rules. The first limitation of the Wali al-Faqih ‎is that he must act within the framework ‎of Islamic laws and the interests of society and Islam and these are not quantitative ‎restrictions.”‎