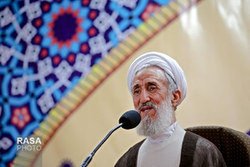 Ayatollah Seddiqi stated that Imam Ja’far al-Sadiq accepted students into his school without ‎any condition based on age, class or belief and said, “The existence of conditions in the ‎acceptance of students in the Islamic seminaries is contrary to the Ja’fari school of thought.”‎

RNA – Speaking at Tehran’s Ozgol Grand Mosque, Ayatollah Kazem Seddiqi, the head of the ‎Imam Khomeyni Seminary in Tehran, commemorated the anniversary of the martyrdom of ‎the head of the Shi’ah school of thought, Imam Ja’far al-Sadiq, and said, “God commands all ‎believers not to distance themselves from the line of al-sadiqayn [“the two truthful ones” – ‎Imam Muhammad al-Baqir and Imam Ja’far al-Sadiq].” ‎

His Eminence added, “This demonstates that as long as there is a world of creation, there is ‎truth in this world that knows life combined with honesty, death and a guide.”‎

He stated that the blessed essence of the Commander of the Faithful [Imam Ali] was that he ‎was siddiq al-akbar [the great truthful one] and said, “All the pure Imams were sincere and ‎were at the apex but the one whose table of honesty became famous in the world was the ‎blessed existence of Imam al-Sadiq.”‎

Ayatollah Seddiqi stated that Imam al-Sadiq had a longer life than the other infallible Imams ‎and the period of his Imamate was longer and for this reason, he was able to spread ‎practical honesty and religious knowledge among the people.‎

His Eminence emphasized that the Infallible Imams were the repository of divine knowledge ‎and said, “The enemies also knew that the sciences of these great men weren’t acquired and ‎their sea of knowledge benefited from the treasures of divine unseen and for this reason, ‎they constantly restricted the pure Imams and sought to martyr these great men.”‎

He stated that the first mission of Imam al-Sadiq was to develop knowledge and seize the ‎culture of the society and continued, “Imam al-Sadiq trained 4,000 scholars and the caliphate ‎had to take advantage of the existence of these students, many of them were considered ‎influential by the Imam.”‎

Ayatollah Seddiqi said that science creates power and noted, “Imam al-Sadiq spread his ‎scientific table spread very widely to practically seize the oppressive government, even if it ‎was in the name of the usurping caliphs, to lower the flag of oppression.”‎

He went on to say that people could have obtained knowledge in Imam al-Sadiq’s school of ‎science without any conditions and said, “Today, the Islamic seminaries have entrance ‎conditions. They aren’t the schools of Imam al-Sadiq if such a condition exists that if ‎someone is of a certain age, he can no longer enter the school of Imam al-Sadiq. In the ‎school of the Ahl al-Bayt, people from the age of three to ninety participated and benefited ‎from the sea of knowledge and teachings of those nobles.”‎

Ayatollah Seddiqi’s important advice for removing the tribulation from society

FATF demands not in Iran’s interests