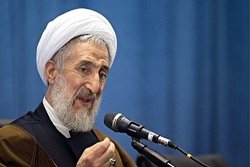 The temporary Friday prayer leader of ‎Tehran said, “General Soleymani wasn’t only obedient ‎to the Supreme Leader but also a devotee of the vicegerent of the ‎Imam of the Time.”‎

RNA – Speaking at a gather of pilgrims at the Holy Shrine of Imam al-Ridha in Mashhad on ‎the occasion of the martyrdom anniversary of Lady Fatimah al-Zahra, Ayatollah Kazem ‎Seddiqi, the temporary Friday prayer leader of Tehran, offered his condolences on the ‎martyrdom of General Qasem Soleyman and said, “This martyred general was the righteous ‎servant of God and was the hope and supporter of the oppressed and was a thorn in the ‎eyes for the enemies, the Zionists, the Americans and Daesh.”‎
‎ ‎
Referring to the features of General Soleymani, His Eminence said, “The character of this ‎martyr was modeled after Lady Fatimah al-Zahra, the Purified Imams, the late Imam ‎‎[Khomeyni] and the Supreme Leader of the Islamic Revolution [Ayatollah Khamenei]. He ‎was a worthy human being who was complete in various dimensions and was unique and ‎exemplary in his morality and wasn’t only obedient to the Supreme Leader but also devotee ‎of ‎the vicegerent of the Imam of the Time.”‎

Ayatollah Seddiqi‎ added, “Just as we don’t have the right to question the Imams and we ‎accept everything that they say wholeheartedly, General Soleymani was like this with the ‎Supreme Leader and higher than a devotee, he was a lover of the Supreme Leader‎.”‎

His Eminence explained that Lady Fatimah was the model of General Soleymani and added, ‎‎“If our commander lovingly obeyed his wali (protector) and planned to put his life on the line ‎in defence of Islamic sanctities and the holy shrines of the Ahl al-Bayt and destroyed the ‎roots of Daesh, which was a sectarian sedition, this was modeled on this great lady of ‎Islam.”‎
‎ ‎
He said, “Today, it was the Kharijites of Nahrawan, under the name of Daesh and the al-‎Nusrah Front, who have come to the war against Islam and the holy shrines, and it was our ‎Malik al-Ashtar – General Soleymani – who silenced the sedition.”‎
‎ ‎
Ayatollah Seddiqi ‎described General Soleymani as “the beloved of God” and said, “Because ‎this commander was beloved by God, he became beloved in the hearts of the people and ‎such a [gloriously attended] funeral took place which was unprecedented in history also ‎because it took its colour from the Ahl al-Bayt. The method of his martyrdom was similar to ‎that of the Ahl al-Bayt and his body was in pieces.”‎