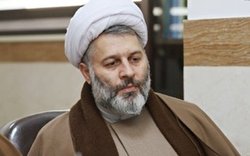 Hujjat al-Islam Sadeqi emphasized that today, Iran needs managers who are from among ‎the people and who have the original and authentic thought of the Islamic Revolution.‎

RNA – In in an exclusive interview with Rasa News Agency in Sari, Hujjat al-Islam Latif ‎Sadeqi, the deputy of propagation in the Islamic Seminaries of Mazandaran, referred to the ‎inauguration of Iran’s eleventh parliament, the Islamic Consultative Assembly, and referred ‎to the message of the Supreme Leader of the Islamic Revolution, Ayatollah Sayyed Ali ‎Khamenei saying, “A member of parliament in the Islamic system must have a revolutionary ‎spirit. Civility, simplicity of life, oppression and sincerity are among the most important ‎characteristics of a revolutionary representative.”‎

He said that a representative at the level of the Islamic Revolution must know the enemies, ‎stand against the arrogant powers and be free from any worldly affiliations and added, “A ‎representative who is devoted to political movements and groups can never take the path of ‎serving the people.”‎
‎ ‎
Hujjat al-Islam Sadeqi noted that all of the concerns of a revolutionary representative must ‎be to serve the people, the Islamic Revolution and the Islamic system and said, “A ‎representative who thinks about matters other than these matters won’t have any existential ‎effects for the country and people.”‎
‎ ‎
He emphasized that the member of parliament must be in the service of the revolution, the ‎system and the people of Iran and noted, “A representative at the revolutionary level ‎defends the rights of the deprived and oppressed of society and doesn’t supports the ‎movements and gangs of power and wealth.”‎

Hujjat al-Islam Sadeqi emphasized that today, the country needs managers who are from ‎among the people and who have the original and authentic thought of the Islamic Revolution ‎and said, “A manager with aristocratic and foreign thinking regarding the problems and ‎troubles of the people won’t have any positive effect for the country and our people.”‎

Representative of the Supreme Leader in the IRGC:‎