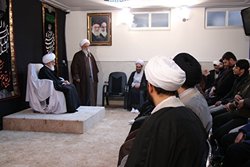 Ayatollah Sadeqi-Rashad stated that sincerity creates miracles and added, “I really envy Haj Qasem Soleymani, who has become a model for society through his struggling and sincerity.”

RNA – Speaking at a gathering of seminarians and teachers at Imam Reza Seminary in Tehran with Grand Ayatollah Hoseyn Nouri-Hamadani, Ayatollah Ali-Akbar Sadeqi-Rashad, the head of the Council of the Islamic Seminaries of Tehran, offered his condolences on the martyrdom of Lady Fatimah al-Zahra, the daughter of the Prophet Muhammad, and added, “Through his martyrdom, General Qasem Soleymani breathed new life into the Islamic Resistance Front.”

The member of the Supreme Council of the Cultural Revolution added, “The soul of Haj Qasem was taken out of his body in small pieces and entered the great body of the Islamic Resistance Front and we will see the further dynamism of the Islamic Revolution and the Islamic Resistance Front. The hearts of the arrogant power [the United States] were shaken, especially because the magnitude of this incident, and they became fearful. They also witnessed the epic participation of people in the funeral ceremony of this commander and his companions.”

Ayatollah Sadeqi-Rashad stated that sincerity creates miracles and added, “I really envy Haj Qasem Soleymani, who has become a model for society through his struggling and sincerity.”

On Friday, January 3rd, airstrikes by the United States assassinated General Qasem Soleymani, commander of the IRGC’s Qods Force, and Abu Mahdi al-Muhandis, the second-in-command of Iraq’s Popular Mobilization Forces (PMF), among others, after targeting their vehicles outside Baghdad International Airport in Iraq. The assassinations took place under the direction of Trump, with the US Department of Defense taking responsibility for the strike.