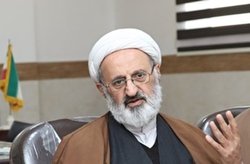 Hujjat al-Islam Abutorabi referred to the important words of the Supreme Leader on ‎International al-Quds Day and considered these guidelines as a strategy for the liberation of ‎Palestine and the holy city of al-Quds.‎

RNA – In an exclusive interview with Rasa News Agency, Hujjat al-Islam Mahmoud ‎Abutorabi, the director of the Islamic Seminaries of Mazandaran, referred to the important ‎remarks of the Supreme Leader of the Islamic Revolution, Ayatollah Sayyed Ali Khamenei, ‎on International al-Quds Day, and considered these guidelines as a strategy for the liberation ‎of Palestine and the holy city of al-Quds (Jerusalem).‎
‎ ‎
He said that the important and clever remarks of the Supreme were a great blow to the ‎United States, the Zionist regime and its Western and Arab supporters, adding, “These ‎important remarks thwarted many of the enemies’ conspiracies and seditions.”‎
‎ ‎
He emphasized that the leaders of the Islamic countries of the world should consider the ‎guidelines of the Supreme Leader and said, “The important words of the Supreme Leader are ‎the best solution for the liberation of Palestine and the holy city of al-Quds from the claws of ‎the Zionists.”‎
‎ ‎
Hujjat al-Islam Abutorabi emphasized that Major General Shahid Qasem Soleymani was the ‎flag bearer of the struggle against the Zionists and said, “Today, the continuation of the path ‎and the school of that martyr is the path to the liberation of the holy city of al-Quds and the ‎oppressed Palestinian people.”‎
‎ ‎
Emphasizing that defending the oppressed people of Palestine is a human and Islamic duty, ‎the teacher director in the Islamic Seminaries of Mazandaran stated, “Not only Muslims, but ‎all freedom-seekers and human rights activists in the world must rise against the crimes of ‎the usurping Zionist regime.”‎
‎ ‎
He also noted the Americans’ efforts to normalize the presence of the usurping Zionist ‎regime in the region and said, “Muslim countries around the world must stand up to this ‎dangerous American criminal plan and defend the inalienable rights of the oppressed ‎Palestinian people.”‎
‎ ‎
Hujjat al-Islam Abutorabi emphasized that Palestine will be liberated by the power and ‎strength of God with the help of the resistance of the people and the oppressed people of ‎this country and said, “Those who participated in the crimes of the Zionist regime in any way ‎must one day be held accountable for their shameful actions.” ‎