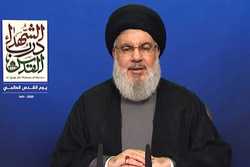 Sayyid Hasan ‎Nasrallah delivered a message to the Lebanese nation and the enemies. It was ‎delivered during a joint platform involving leaders of the region’s Resistance factions.‎

RNA – The following is a translation of the message from Hujjat al-IslamSayyid Hasan ‎Nasrallah, the Secretary-General of Hezbollah, to the Lebanese nation and the enemies. It was ‎delivered during a joint platform involving leaders of the region’s Resistance factions on May 22nd.

I seek refuge in God from the accursed Satan. ‎

In the Name of God, the Most Gracious, the Most Merciful

Praise be to God, Lord of the Worlds, and prayers and peace be upon our Master and ‎Prophet, the Seal of Prophets, Abi al-Qasim Muhammad ibn Abdullah and his good and pure ‎household and his good and chosen companions and all the prophets and messengers.‎

Peace and God’s mercy and blessings be upon you all.‎

The International al-Quds Day is one of the blessed legacies of His Eminence Imam ‎Khomeyni. The Imam revived the hopes of the oppressed and the vulnerable in the world ‎with his great Islamic revolution in Iran in 1979. He declared it on the last Friday of the holy ‎month of Ramadhan. He expressed the firm and final commitment of the Islamic Republic ‎and all the honorable mujahidin and Resistance fighters to the Palestinian cause and al-Quds. ‎He regarded this cause as well as the jihad towards it as one of the duties that cannot be ‎abandoned, regardless of the pressures and challenges and no matter the price and ‎sacrifices.‎

Today, in 2020 and despite all international and regional transformations as well as the ‎storms, earthquakes, and sedition that struck our region, we find ourselves closer to al-Quds ‎and its liberation, God-willing. This is because of faith, steadfastness, patience, honesty, ‎sincerity, and communication between the countries and forces of the axis of Resistance in ‎our Arab and Islamic world.‎

The scene of people normalizing [ties with “Israel”] and surrendering is not the true image of ‎our nation. Rather, it is the true image of those who are concealing their position. Today, ‎they have demonstrated this position, revealed their true identity, and dropped their masks. ‎Those who are {Had they gone forth with you, they would not have increased you except in ‎confusion.}‎

The real scene that any reading, aspiration, or evaluation of the future must be based on is ‎the scene of steadfastness, resilience, and development of the Resistance forces as well as ‎governments, countries, factions, movements, people, and elites in the Arab and Islamic ‎world – in Palestine, in Iran, in Iraq, in Syria, in Yemen, and in Lebanon – where there are ‎supporters, believers, and people who are committed.‎

In these countries, we are talking about real, effective, capable, and strengthening forces. ‎The real scene is expressed by the statements and positions of the Zionist officials, who are ‎terrified of the victories of the axis of Resistance as well as shocked and disappointed at the ‎defeat of their allies and America’s allies along numerous fronts and in numerous wars and ‎confrontations.‎

Zionist officials express their strong fear of the growing capabilities of the Resistance – in ‎quantity, manpower, armament, artistically, and morally – at all levels and in every respect.‎

During today’s gathering, speeches are delivered by the brothers whom we love, respect, ‎and bet on.‎

Today’s gathering represents a unified platform for al-Quds Day. It comes under one slogan ‎which is the slogan of al-Quds and the path of the martyrs. This gathering confirms our ‎agreement that all conspiracies and sedition to divide on the basis of sectarianism, ethnicity, ‎partisanship, or politics have failed.‎

al-Quds Day comes due to the blessing of God’s holy month of Ramadhan. This year it falls ‎in the month of May coinciding with Lebanon’s Liberation and Resistance Day - the 20th ‎anniversary of the historic victory of the Resistance in Lebanon over the Zionists, their ‎occupation, their ambitions, and their projects.‎

We in Hezbollah and in the Islamic Resistance in Lebanon stress our firm and resolute ‎commitment to this cause. We confirm our pledge to remain on this path alongside the ‎patient, oppressed, and besieged Palestinian people, the blessed Palestinian Resistance ‎factions, and all the living and faithful forces of the nation.‎

We are all confident that victory will come soon, God-willing, and that the sacrifices and ‎patience of the mujahidin, the Resistance, our people, our men and women as well as our ‎young and old will change all the equations.‎

During this year’s al-Quds Day, we are missing a great leader who walked on the road of al-‎Quds and fought on the al-Quds front. He was righteously given the name of the martyr of ‎al-Quds. A beloved and dear brother as well as a great Mujahid and commander, Hajj Qasim ‎Soleymani was one of the great pillars of the Resistance, its battles, and its victories. He was ‎a great pillar of the Resistance that is paving the way for its greatest victory yet – the ‎liberation of al-Quds – God-willing.‎

He worked day and night throughout his honorable and blessed life so that the Resistance in ‎all regional countries remains alive, capable, ready, strong, and empowered for the day that ‎we all look forward to.‎

To his pure spirit, we pledge that we will all remain on his path and fulfill his dreams and ‎utmost aspirations. We will not despair, tire, or get bored despite the pressures, the ‎psychological warfare, the sanctions, and all sieges, threats, and dangers.‎

We will remain on this path filled with faith, hope, and certainty. We will carry our blood in ‎our hands and head to the frontlines. We will not hesitate to face all the challenges in the ‎way that he taught us in his school and his path which he embodied in thought, culture, ‎behavior, and action.‎

God-willing, this year we pledge to the great martyr of al-Quds Haj Qasem Soleymani, to all ‎the martyrs who followed the path of al-Quds, to all the minds and hearts carrying these ‎hopes, to all the mujahidin awaiting the day when this dream comes true to remain on this ‎path, to make every effort to eliminate all obstacles, to stand together and unite, and to ‎create all the conditions and prepare the groundwork for the day that will inevitably come. ‎That day when we will all pray in al-Quds, God-willing, in the al-Aqsa Mosque, in Bayt al-‎Maqdis. It will be liberated by the blood and the hands of the loyal and virtuous people of ‎our nation.‎

Today in this brief and short address, I appeal to all the people of our nation and to the ‎Arab and Islamic peoples to mark this day in appropriate ways – through the media, ‎culturally, politically, socially and artistically.‎

I call on them to take advantage of all the activities that have been announced, taking into ‎account the new conditions that the Coronavirus pandemic imposed on the world and the ‎peoples of the world.‎

Taking into account all required preventive measures, al-Quds Day this year should be the ‎same as every year. It should be strongly present in our conscience, minds, hearts, ‎emotions, will, culture, activities, and actions because al-Quds is the goal that all eyes, ‎minds, and hearts should be directed at. God-willing, we will get there.‎

Peace and God’s mercy and blessings be upon you all.‎