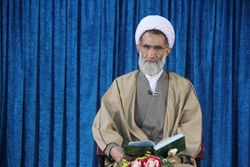 Ayatollah Nekounam referred to Labour Day and said, “Workers are certainly important ‎elements of society and play a key role in advancing the economic goals of the system, ‎which must be given serious attention.”‎

RNA – Hujjat al-Islam Mohammad-Ali Nekounam issued his weekly statement via the internet ‎in place of the cancelled Friday prayer sermon to the people of Shahrekord.‎

Friday prayers have been cancelled in Shahrekord and many other cities throughout Iran due ‎to the outbreak of COVID-19 (Coronavirus) to prevent the spread of the Coronavirus and ‎maintain the health of the people. ‎

Pointing out that the Coronavirus must not cause a shortcoming in approaching God, he ‎said, “Through Ramadhan, Friday prayers and all the rites of religion we can reach the ‎entirety of spirituality. If today, the conditions for large ceremonies don’t exist, we must ‎communicate with God individually and until this connection is made, closeness to God won’t ‎be realized.”‎

The representative of the Supreme Leader of the Islamic Revolution in Chaharmahal and ‎Bakhtiari province also referred to May 1st and the naming of this day as Labour Day and ‎said, “Workers are certainly important elements of society and play a key role in advancing ‎the economic goals of the system, which must be given serious attention.”‎

Ayatollah Nekounam also pointed to the naming of May 12, in memory of Shahid Mortaza ‎Motahhari, as Teacher’s Day in Iran, and said, “Teachers are the generators of science and ‎thought in society. As much as science and thought are valuable, the position of the teacher ‎is also valuable.”‎

His Eminence also referred to the anniversary of the martyrdom of the great philosopher ‎Shahid Motahhari, who was martyred on May 12, 1979, and said, “Martyr Motahhari was a ‎warrior, pious, committed, religious, servant and thoughtful man who produced knowledge. ‎He entered the field of action with all his might and didn’t let knowledge destroy man.”‎

He further pointed out that the tenth day of the holy month of Ramadhan is approaching ‎and the anniversary of the death of Lady Khadijah al-Kubra and said, “Lady Khadijah was ‎one of the women who played the most important role in strengthening the religion of God ‎and in this way he sacrificed everything.” ‎

Representative of the Supreme Leader in Chaharmahal and ‎Bakhtiari:‎