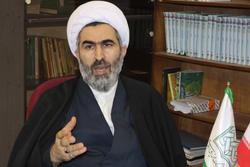 Hujjat al-Islam Moqimi-Haji considered the inability of the American government to provide ‎general items, its weakness in medical care and its theft of other countries’ medical supplies ‎as a sign of the decline of the United States as a superpower.‎

RNA – In an exclusive interview with Rasa News Agency, Hujjat al-Islam Abolqasem Moqimi-‎Haji, the head of the Religious Encyclopedia Research Institute, that the inability of the ‎government of the United States to provide essential data-x-items in stores and shopping malls, its ‎weakness in medical care and its theft of other countries’ medical supplies are signs of ‎confusion and decline of the United States’ as a superpower

His Eminence added, “The concept of good or desirable governance in the West has been ‎challenged and concepts such as responsibility, participation, public consensus and social ‎self-sacrifice have been forgotten.”‎

He emphasized, “Westerners have been continuously chanting the slogan of social justice ‎but the culture of materialism has caused the Western governments to lose control of public ‎affairs and services in today’s Coronavirus-stricken world. As far as is reported, young ‎people are fighting with elderly people to survive and ventilators are being taken from the ‎elderly.”‎

Hujjat al-Islam Moqimi-Haji assessed the Coronavirus-stricken communities in need of self-‎sacrifice and said, “This is where the attention to the divine power and the saviour of the ‎world is felt. This is an opportunity for the Islamic world and we must seize this opportunity ‎and respond to the need for a moral society.”‎

His Eminence spoke about the spiritual condition of the people of the world during the post-‎Coronavirus era, “The global media is a tool for the United States and the West to exercise ‎power in today’s material world. The global arrogance, with its cinematic productions, ‎materialistic messages and false charms leads the people of the world toward a worldview ‎and humanistic thought and to turn away from belief in God.”‎

He added, “Given the weakness of the power and media facilities among the believers in ‎God, it’s unlikely that we will see a profound change in the world because the dominant ‎discourse in the media is based on atheistic or liberal beliefs.”‎

Hujjat al-Islam Moqimi-Haji stated about turning the threat of the Coronavirus into an ‎opportunity, “In Islamic culture, we have been taught how to use the opportunities that ‎arise in adversity and this opportunity can be used to humanize, to understand problems, to ‎understand fellow human beings and to strengthen the monotheistic view.”‎
‎
Rasa News Agency