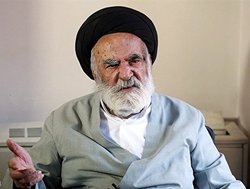 Ayatollah Karimi, a revered Islamic scholar and companion of Imam Khomeyni and Ayatollah Khamenei, passed away in Qom at noon on March 28, 2020 at 90 years of age.

RNA – Ayatollah Sayyed Ja’far Karimi, a revered Islamic scholar and companion of Imam Khomeyni and Ayatollah Khamenei, passed away in Qom at noon on March 28, 2020 at 90 years of age.

The death of this great scholar was unrelated to COVID-19 (Coronavirus) and died of a heart disease.

Ayatollah Karimi was born in 1930 CE in the village of Div Kala, near Babol in Mazandaran, to a religious family. Due to the request of his mother, as well as the encouragement of his maternal uncle, the late Ayatollah Haj Sayyed Ahmad, he was determined to study the religious sciences. His mother was also a well-educated and spiritual woman who played a major role in raising her son. Ayatollah Karimi’s family was prominent as clergymen and were highly valued for their religious studies.

He childhood was accompanied by the height of Reza Shah’s repression. He was only able to study the Holy Quran until 1941 when he started learning introductory Islamic studies with Thiqat al-Islam Sayyed Mahmoud Movahedi in an organized manner. In September 1944, he entered the Islamic Seminary of Babol and studied there until September 1947 when he moved to Qom to study in the Islamic Seminary where he studied sath (intermediate) level studies until 1953.

Studies in Qom and Najaf

In October 1947, he set out for Qom take advantage of the great scholars and teachers in the Islamic Seminary of the holy city and advanced to the kharij (post-graduate) level. In December 1954, at the behest of his father, Sayyed Reza, he moved to Najaf and studied there until 1979. During the years that Imam Khomeyni was present in Najaf, Ayatollah Karimi attended classes in the holy city.

After the victory of the glorious Islamic Revolution, Ayatollah Karimi returned to Iran where he taught courses in logic, Arabic literature, jurisprudence and principles of jurisprudence to the highest levels several times and taught for a year at the Higher School of the Judiciary and Education in Qom and two years at Shahid Motahhari Higher School and School of Judiciary Sciences in Tehran.

With the election of Ayatollah Sayyed Ali Khamenei as the Supreme Leader of the Islamic Revolution on June 4, 1989, and in July of that year, Ayatollah Karimi was made responsible for responding to inquiries sent to his office, which continued under his supervision until the end of his life. From October 1368 until the end of his life, he often had a weekly meeting with the Supreme Leader where they discussed jurisprudence and jurisprudence and innovative issues are discussed in a discursive manner.

Ayatollah Karimi had roles in various arenas, including politics, since his adolescence. Having tasted the bitter taste of Reza Shah’s tyranny in his childhood and adolescence, he developed a sense of struggle and a motivation for the elimination of tyranny within himself.

He played an important role in the election of Ayatollah Khamenei as the Supreme Leader in 1989 and from that date until the end of his life he has always supported the progressive principle of Wilayat al-Faqih (Guardianship of the Jurisprudent) and served in the holy system of Islamic Republic in multiple roles.