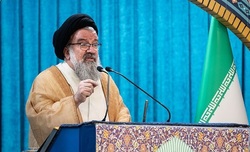 Ayatollah Sayyed Ahmad Khatami said that taking part in the ongoing elections in Iran is a legal and religious obligation and noted that the participation of people in polling will practically fulfill the motto of “death to America.”

RNA – Addressing a gathering of worshippers at Friday prayers in Tehran, Ayatollah Sayyed Ahmad Khatami said taking part in the parliamentary elections and the midterm elections of the Assembly of Experts is a religious, national and revolutionary duty that will help the people exercise the right to decide their own fate, according to Tasnim News Agency.

He also stressed that a high voter turnout in Iran is so significant that the enemies of the Islamic Republic have been doing their utmost to dissuade people from voting, adding, “I call on people to practically fulfill (the motto) ‘death to America’ with their presence (in the election).”

The cleric then underlined that the United States’ assassination of top Iranian commander Lt. General Qasem Soleymani has failed to make the Islamic Resistance axis any weaker, emphasizing that the resistance front will keep working until “the destruction of the Zionist regime and the expulsion of all American forces from the region.”

The nationwide votes for the parliament and the midterm elections of the Assembly of Experts officially began in Iran on Friday morning.

In comments after voting just minutes after beginning the elections, the Supreme Leader of the Islamic Revolution Ayatollah Sayyed Ali Khamenei, described the election day as a “national celebration” and a day to “restore the civil rights of the nation.”

Ayatollah Khamenei also emphasized that participation in the election is a “religious duty.”