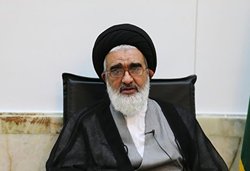 The custodian of the Holy Shrine of Lady Fatimah al-Ma’sumah said, “The enemies must know that their conspiracies have the opposite effect on the people, and today, with their passionate presence, the people will clearly show this at the ballot box.”

RNA – Speaking after casting his vote in the eleventh term of the Islamic Consultative Assembly election and midterm of the fifth term of the Assembly of Experts election, Ayatollah Sayyed Mohammad Sa’idi referred to the passionate presence of the people in the various stages of the history of the Islamic Revolution and said, “The people have always thwarted the enemies’ plans and conspiracies through their presence at these religious and political occasions.”

The Friday prayer leader of Qom highlighted the participation of the people in determining their fate as the view of the late Imam Khomeyni and the Supreme Leader of the Islamic Revolution [Ayatollah Khamenei] and said, “The Islamic Consultative Assembly is the tracklayer of the progress and authority of the Islamic system and the people are well-aware of this.”

Ayatollah Sa’idi noted the differences between the Islamic Revolution and the Pahlavi regime in determining the fate of society and emphasized that despite the passionate presence of the people at the critical junctures of the Islamic Revolution, the enemies have always added to their hostility and added, “In spite of these hostilities, the people’s motivation to participate in different arenas is doubled.”

The custodian of the Holy Shrine of Lady Fatimah al-Ma’sumah emphasized that this year, the martyrdom of General Haj Qasem Soleymani and his companions has created a motivation for the people to participate in the elections in a passionate manner and said, “The enemies must know that their conspiracies have the opposite effect on the people, and today, with their passionate presence, the people will clearly show this at the ballot box.”