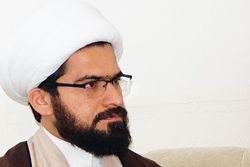 The chairman of Ayatollah Najafi’s office pointed out that Hajj has several benefits such as fostering man’s relationship with Heaven.

According to the correspondent of Rasa News Agnecy in the holy city of Najaf, the son and chairman of Ayatollah Najafi’s office, Sheihk Ali Najafi, pointing to the benefits of Hajj, said that Hajj fosters the relationship of the man with his creator.

He added, “God, the Sublime, attends to the man from his birth, He bestows upon the man uncountable blessings, and Hajj days are some good opportunities for him to thank God in this regard.”

The chairman of Ayatollah Najafi’s office reiterated, “The believing man should grasp the opportunity of Hajj the best so that his sensual status changes and becomes an example for people in the society.”

Inviting Hajj pilgrims to read history, he stated, “Hajj pilgrims are recommended to read and examine the history of the prophet, Heavenly Revelation and distribution of Islam as there are some tight links between the past and present.”