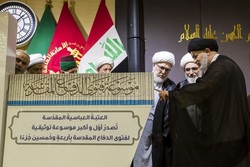 The Encyclopedia of the “Holy Defense Fatwa”, having 45 volumes was unveiled in the holy city of Karbala in the presence of Ayatollah Sistani’s representative.

According to the correspondent of Rasa News Agency in Najaf Ashraf, the fourth festival of the “Holy Defence Fatwa”, with the slogan of “You Are Our Source of Honour, Dignity and Pride against Other Nations”, was held in Imam Hassan Mujtaba (AS) hall in Hazrat Abbas shrine, in the holy city of Karbala.

The representatives of the sources of emulation, like Ayatollah Sistani’s representative and the religious custodian of Hazrat Abbas holy shrine, Sayyed Ahmad Safi, some seminary students, religious, security and cultural figures attended this ceremony.

On the sideline of the ceremony, the biggest 54 volume encyclopaedia, named the “Holy Defence Fatwa” was unveiled. The encyclopaedia was compiled in order to register the bravery and sacrifices made by the Iraqi combatants following the issuance of the Collective Combat against the terrorist takfiri group of ISIS by Ayatollah Sistani.

Hujjat al-Islam Sheikh Tahir al-Khaqani, an official of the Iraqi Popular Mobilization Forces, delivering a speech in the ceremony, said, “This ceremony and participation in it help the fatwa issued by Ayatollah Sistani on the Collective Combat survive longer.”

Attended by the students of West Bohemia University

The analysis of International Relations according to the Islamic Republic

The Promotional Discourse on the Theories of Social Justice