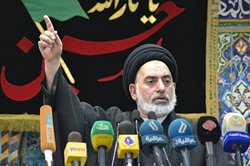 Rasa – Hujjat al-Islam ‎‎‎al-Qubanchi ‎called for the mobilization of the authorities, religious ‎centres and the people to fight against the enemies’ soft war.‎

RNA – In his Friday prayer sermon delivered to a large and fervent crowd of believers in ‎‎the ‎‎‎‎‎‎Iraqi holy city of Najaf’s al-Fatimiyah al-Kubra Husayniyah, Hujjat al-Islam Sayyid ‎‎Sadruddin ‎‎‎‎‎‎al-Qubanchi referred to the trip by the Prime Minister of Iraq, Adil Abdul-Mahdi, to Saudi ‎Arabia and said, “This trip was conducted with three security, economic and political goals in ‎mind and we believe that all these goals, especially its political aspect, are important ‎because it will return Iraq to its original place to the Arab world.”‎
‎ ‎
The Iraqi Shi’ah scholar ‎added that security issues, especially on the borders of Iraq and ‎Saudi Arabia, are another important issue because the terrorists were deployed to Iraq from ‎these borders, and now an agreement has been signed wherein we will no longer see such ‎events.‎
‎ ‎
Hujjat al-Islam ‎‎‎al-Qubanchi described the action of the Iraqi parliament in favour of the ban ‎on online video games, including PlayerUnknown’s Battlegrounds and Fortnite, saying, “The ‎imperialistic powers have launched a soft war against Muslims and therefore, governments ‎have a duty to take responsibility and fight against the soft war that has targeted the Iraqi ‎people and the region.”‎

His Eminence said that the soft war being waged by the enemies has focused on violence, ‎drugs, sexuality and jokes and added, “Religious institutions and centres, families, educational ‎and training centres and universities have a duty to fight in this dangerous war.”‎
‎ ‎
He also commemorated the anniversary of the issuance of obligatory jihad fatwa of Grand ‎Ayatollah Sayyid Ali al-Sistani to fight against the terror of the Daesh Takfiri terrorist group ‎and stated, “The Iraqi people, with a positive response to this fatwa, witnessed its result – ‎the liberation of the country due to the pure blood of the martyrs.”‎
‎ ‎
In June 2014, Ayatollah al-Sistani called on all Iraqi citizens to defend “the country, its ‎‎people, the honour of its citizens, and its sacred sites against the threats posed by ‎Daesh.” ‎‎This led to the formation of the Popular Mobilization Forces.‎

Hujjat al-Islam ‎‎‎al-Qubanchi ‎acknowledged the role of the Iraqi people on the anniversary of ‎the Sha’baniyyah Intifadhah [1991 uprisings] and said, “This intifadhah changed the ‎international strategy in regard to overthrowing Saddam.”‎