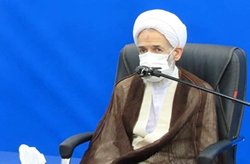 Emphasizing that health and mourning aren’t in conflict with each other, Hujjat ‎al-Islam ‎Mohammadi-Laeini said, “Protecting the lives and health of the people is a religious ‎recommendation.”‎

RNA – In a meeting of the Mazandaran Provincial Planning and Development Council, Hujjat ‎‎al-Islam Mohammad-Baqer Mohammadi-Laeini, the representative of the Supreme ‎Leader of ‎the Islamic Revolution in Mazandaran province, referred to the forthcoming solemn month of ‎Muharram and emphasized the need to observe the hygiene protocols at mourning ‎commemorations. ‎

The Friday prayer leader of Sari stated that all of the Muharram mourning ceremony ‎organizing committees emphasize on following the hygiene instructions and are in agreement ‎and added, “With the efforts of all those involved in this arena, we will witness the proper ‎holding of Muharram mourning commemorations.”‎

He considered the implementation of hygiene recommendations for mourning ‎commemorations during the month of Muharram as a religious, moral and hygiene duty and ‎noted, “The accurate implementation of hygiene recommendations in the month of ‎Muharram is emphasized by the Supreme Leader, the great sources of emulation and the ‎country’s officials.”‎

Hujjat ‎al-Islam Mohammadi-Laeini pointing out that we must accept that the situation in the ‎country is very fragile and special in terms of the spread of the Coronavirus‏ ‏and continued, ‎‎“The slightest mistake and negligence will endanger the lives of people.”‎

His Eminence emphasized that hygiene and mourning aren’t in conflict with each other, ‎saying, “Protecting the lives and health of the people is a religious recommendation and the ‎Supreme Leader and the great sources of emulation have also emphasized this issue.”‎

He stated that the people and officials of our country love the Master of the Martyrs (Imam ‎al-Husayn) and added, “But this year, due to the special circumstances that have prevailed in ‎the country due to the spread of this virus, we must hold the Husayni mourning ‎commemorations in accordance with the hygienic principles.”‎

Stating that our people and officials are Husayni, Hujjat ‎al-Islam Mohammadi-Laeini pointed ‎to the valuable progress of Islamic Iran in various fields and considered it as the root of the ‎point of view and thought of Ashura of the great nation of Iran.‎

Hujjat ‎al-Islam Mohammadi-Laeini added that the issue of the resistance economy as well as ‎the leap in production, which is emphasized by the Supreme Leader, should be given more ‎attention and said, “If we identify and count the internal capacities of the country, many of ‎the economic problems of the country today will surely be minimized.”‎