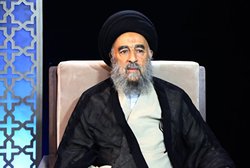 A senior Iraqi scholar stated, “The guardianship of the Commander of the Faithful ‎‎[Imam Ali] at Ghadir Khumm will one day be manifested in Imam al-Mahdi.”‎

RNA – In a statement on the occasion of Eid al-Ghadir, Ayatollah Sayyid Muhammad-‎Taqi al-Modaressi, a senior Najaf-based Iraqi scholar, said, “The Day of Ghadir is the ‎day of the manifestation of divine guardianship over the people, which is found in the ‎guardianship of the Commander of the Faithful [Imam Ali] after the Holy Prophet ‎‎[Muhammad] and that is why the day of Ghadir is the ‘Greatest Eid of God.’”‎

Ayatollah al-Modarresi referring to the manifestation of divine guardianship in the ‎guardianship of the prophets in verse 64 of Surah an-Nisa [Chapter of ‘The Women’], ‎‎“We did not send any apostle but to be obeyed by God’s leave…” and stated, “Divine ‎guardianship was manifested on the Day of Ghadir.”‎

He added, “Imam Ali’s guardianship isn’t only in the political dimension and doesn’t end ‎with the usurpation of the caliphate, just as it didn’t end with the martyrdom of the ‎Imam. The guardianship of Imam Ali on the day of Ghadir will be manifested in Imam ‎al-Mahdi one day.”‎

Eid al-Ghadir is among the important feasts and happy holidays of the Shi’ah ‎Muslims ‎and is held on Dhi al-Hijjah 18; when according to reports, the ‎noble Prophet ‎Muhammad appointed Ali ibn Abi Talib as his caliph ‎and the Imam after himself ‎following an order from God. That event ‎happened in the Prophet’s Hajjat al-Wida’ (the ‎Farewell Hajj), in 10 ‎AH/632 CE in a place called Ghadir Khumm.‎