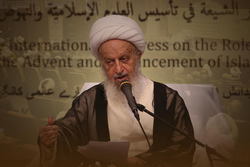 The revered source of emulation said, “After extensive research, we realized that the role of ‎the Shi’ah scholars in the emergence and development of Islamic sciences is still obscure to ‎people.”‎

RNA – In his message to the closing ceremony of the International Congress on the Role of ‎the Shi’ah School in the Emergence and Development of Islamic Sciences held in Mashhad, ‎Ayatollah Makarem-Shirazi stated, “The dissemination of Islamic Sciences was one of the ‎reasons why Imam al-Ridha accepted to be appointed Ma’mun’s successor.”‎

According to the news headquarters of the International Congress on the Role of the Shi’ah ‎School in the Emergence and Development of Islamic Sciences, Ayatollah Naser Makarem-‎Shirazi sent a video message to the closing ceremony of the congress which was held in the ‎Quds Hall of the Holy Shrine of Imam al-Ridha. ‎

In his message, he thanked the scholars and thinkers who had participated in the congress ‎and state, “After extensive research, we realized that the role of the Shi’ah scholars in the ‎emergence and development of Islamic sciences is still obscure to people.”‎

He also stated that not only do the non-Shi’ah not have much information concerning the ‎role of prominent Shi’ah figures in the development of Islamic sciences, but the Shi’ah ‎themselves are not very aware of this.‎

He then continued, “This was why we felt such a congress was necessary to be held in order ‎to shed light on the contributions of the Shi’ah school to the development of Islamic ‎sciences.”‎

His Eminence also added, “The Imam provided us with clues and our great scholars followed ‎up those clues which resulted in a lot of invaluable scientific achievements. These ‎achievements, therefore, must be made known to all Muslims and non-Muslims.”‎

Ayatollah Makarem-Shirazi, then, noted, “We invited to this congress over 400 Iranian and ‎foreign researchers and they worked with each other to compile the list of the Shi’ah ‎scientific achievements into several bulky books.”‎

He also asserted, “These researchers along with the various committees of the congress ‎worked hard over the past two years and the result of their extensive research was more ‎than 50 books. These books contain lists of the contributions of the Shi’ah school to the ‎development of Islamic sciences, some of which have been obscure to us ourselves too.”‎

His Eminence further noted, “The reason why we decided to follow the congress up in ‎Mashhad after the congress was closed in Qom was to emphasize the significant role of ‎Imam al-Ridha in the emergence of Islamic sciences.”‎

He then discussed the reasons behind Imam al-Ridha’s acceding to Ma’mun’s order, who ‎wanted the Imam to accept to be appointed his successor. ‎

He stated that one of the reasons behind this was that the Imam had a great chance to ‎promote and disseminate Islamic sciences this way. ‎

He also asserted, “It seems fitting to further study the contributions of the Shi’ah school to ‎the development of Islamic sciences here, by the Holy Shrine of Imam al-Ridha, so that ‎some books could be compiled in this regard and translated into different languages.”‎