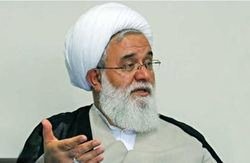 Ayatollah Rashad stated that the time has come for the collapse of the American empire and ‎said, “The crimes of the United States are the nature of this usurping, criminal, violent and ‎criminal government and some want to reduce this crime to the level of police violence.”‎

RNA – Speaking before the beginning of his dars al-kharij (post-graduate) jurisprudence ‎course, Ayatollah Ali-Akbar Rashad, the chairman of the Policy Council of Islamic Seminaries ‎of Tehran Province, referred to the current developments in the United States and said, “The ‎time has come for the collapse of the oppressive and empty American empire.”‎

Condemning the recent crimes in the United States, he added, “These crimes are the nature ‎of the usurping, criminal, violent and criminal government of the United States and some ‎want to reduce this crime to the level of police violence.”‎

Ayatollah Rashad noted that news restrictions which exist in the United States didn’t properly ‎reflect the news and crimes taking place in the country and added, “Some of the crimes and ‎incidents that have been published, including the murder of the oppressed black man ‎‎[George Floyd], the taking and throwing of an infant from his mother’s arms, the beating of ‎people, etc., are very heartbreaking and sad.”‎

He continued, “However if a smuggler or a murderer is punished and executed, his cry for ‎human rights will deafen the ears of the sky. In the past two weeks, have any of the ‎countries which claim to defend human rights condemned the crimes committed in the United ‎States? The leaders of France, Germany and the United Kingdom didn’t have the slightest ‎objection to this crime and tragedy, and some even endorsed Trump’s campaign.”‎

Ayatollah Rashad added, “The same president who said he will build a wall on the United ‎States-Mexico border to protect the Americans, we saw on Friday [June 5th] how he built a ‎wall around the White House to protect himself and the White House against the American ‎people. The anti-human behaviour of the United States is a sign of the decline of the empty ‎American empire.”‎

It should be noted that George Floyd, a 46-year-old ‎African-the American man, who was ‎killed in Minneapolis, Minnesota on May 25, 2020, after ‎allegedly using a counterfeit $20 bill ‎at a market. ‎

While Floyd was handcuffed and lying face down on a city street during an arrest, Derek ‎‎Chauvin, a white the American Minneapolis police officer, kept his knee on the right side of ‎‎Floyd’s neck for 8 minutes and 46 seconds. According to the criminal complaint against ‎‎Chauvin, 2 minutes and 53 seconds of that time occurred after Floyd became unresponsive.‎

After Floyd’s death, demonstrations and protests in the Minneapolis-Saint Paul area were ‎‎initially peaceful on May 26, and later that day became violent as a police precinct and two ‎‎stores were set on fire, and many stores were looted and damaged. Some demonstrators ‎‎skirmished with police, who fired tear gas and rubber bullets. Additional protests developed ‎‎in over 200 cities throughout all 50 states in the United States as well as internationally.‎